An Energy State No More: As coal vanishes from the grid, so might West Virginia’s status as an energy state 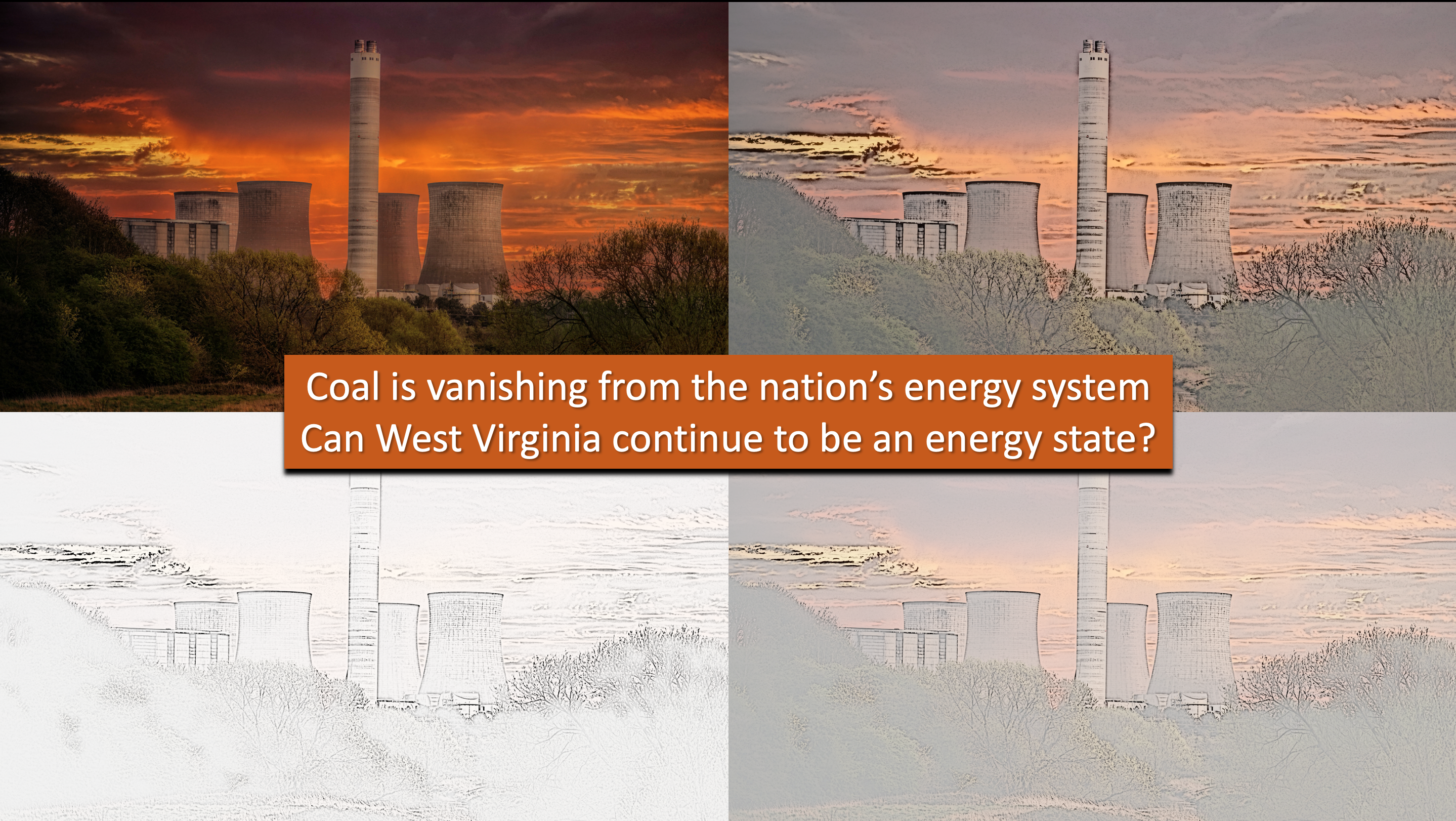 In 10 years, unless West Virginia leapfrogs from its coal-dominated energy system to one driven by clean renewable resources, it will cease to be an energy state

West Virginia’s status as an energy state — one that produces more energy than it consumes – will almost certainly come to an abrupt end within the next ten years and possibly sooner. That’s because market forces, even more than political ones, are inexorably eradicating coal from the nation’s electricity system.

West Virginia, which generates nearly twice as much electricity as it consumes, relies on coal for 91% of its output. So, as coal goes, so does West Virginia’s status as an energy state, which for many West Virginians is as much an issue of identity as it is of economics. But the economics are the driving force and they are irresistible.

In February, the investment house, Morgan Stanley,  concluded that coal will disappear from the nation’s energy grid by the year 2033. Market trends bear that out. As recently as 2008, nearly half of America’s electricity came from coal. But, by 2019, only 12 states continued to generate even 40% of their electricity from coal. And, in those states, average residential monthly bills rose at twice the rate of the nation as a whole.

The problem is that coal is no longer cost-competitive as an energy resource. That’s true even before taking into account coal’s destructive effects on the environment, peoples’ health, and climate. Because coal can’t compete in the marketplace, its share of the nation’s energy mix is plummeting. And the West Virginia legislature’s various attempts to save coal and stem what is truly a global tide are both futile and increasingly costly for West Virginians who already see 50% more of their disposable incomes consumed by utility bills than do residents of other states.

A major factor delaying a decline in coal-fired electricity generation in West Virginia is that the state’s electric utilities, which operate as regulated monopolies, have been allowed by the state Public Service Commission to recover operating losses at coal-fired power plants from the state’s ratepayers.

This practice has resulted in plants that would have otherwise been driven out of business remaining in operation. And it has invited corporate exploitation and abuse. In 2016 a report from the Institute for Energy Economic Financial Analysis (IEEFA) explained how, with the approval of the West Virginia Public Service Commission, Ohio-based First Energy Corp. (since renamed Energy Harbor), which owns Monongahela Power Company, was allowed to shift ownership of the old, money-losing Harrison coal-fired power plant to its West Virginia subsidiary. Then, over the next three years, the plant proceeded to lose approximately $164 million all of which was passed along to West Virginia customers through rate increases.

The practice of dumping inefficient and money-losing plants on states whose electric systems remain regulated and where there is a high probability that public service commissions will rule favorably on issues of cost-recovery, is known as “re-regulation”. The Harrison transaction is just one case and was, according to IEEFA report, cited as “a model” for future transactions by then First Energy CEO Chuck Jones who has since been forced out of his position as a result of a legislative bribery scandal in Ohio.

In the end, the market will win out and coal-fired power will go

In the not-so-long run, legislative and regulatory efforts to save coal-fired power in West Virginia will fail in the face of an energy market that is being flooded with lower cost alternatives. The following chart from the energy analysis firm, Lazard, illustrates the degree to which the cost of coal-fired generation is now substantially higher than generation from wind, solar, and natural gas. Note that the chart compares “unsubsidized” costs, meaning that the analysis removes from the equation government subsidies that coal proponents often argue favor renewable resources.

Also, in the nation’s effort to fight climate change and reduce the harmful impacts on health and the environment from localized pollution, it’s likely that additional clean energy incentives and carbon pricing policies will be enacted, which will worsen coal-fired power’s cost disadvantage and accelerate its demise. 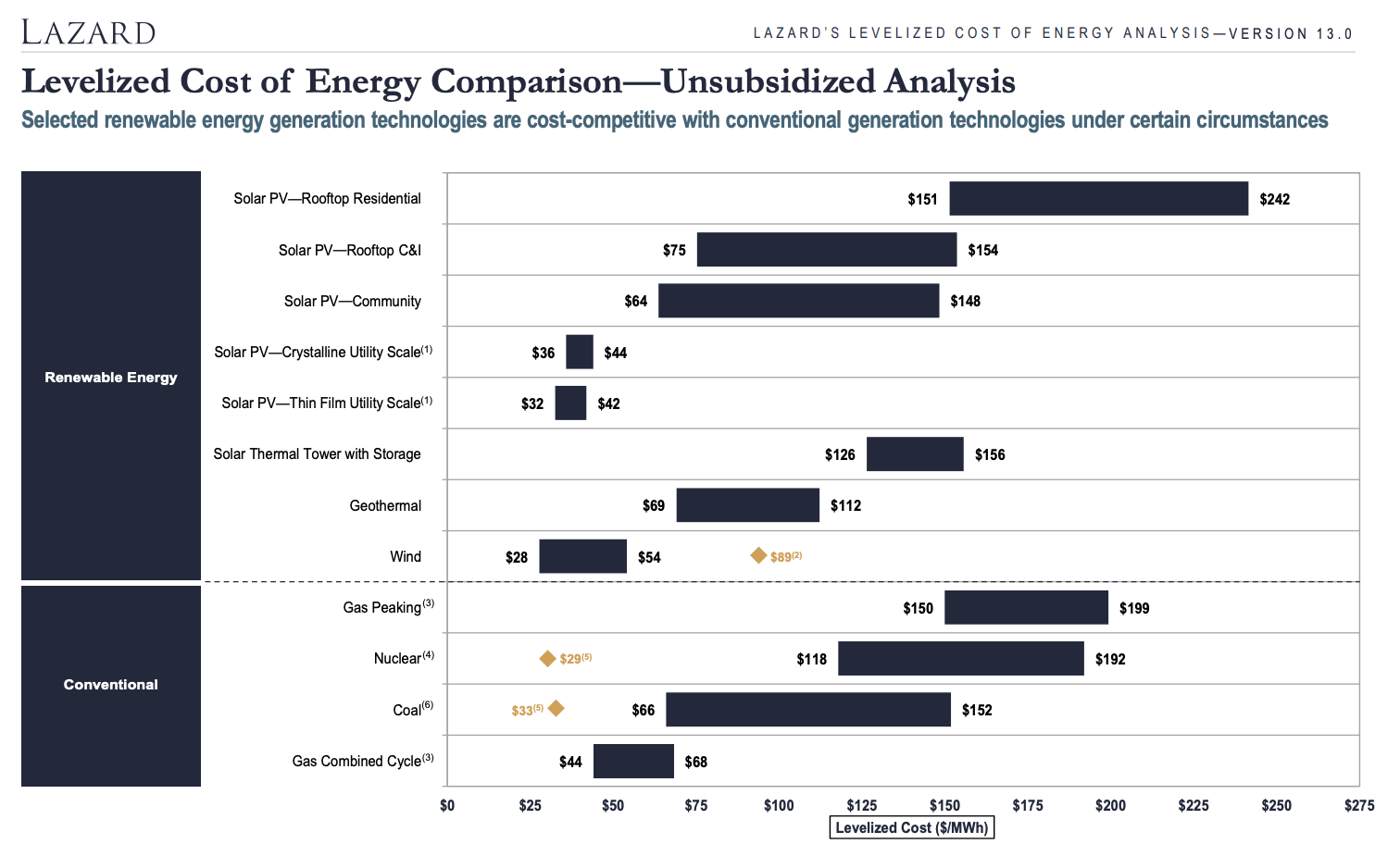 CCS and Other “Clean Coal” Technologies Won’t Save the Day

Some proponents of coal have expressed optimism that new technologies, such as carbon capture and sequestration (CCS), may restore coal’s viability by reducing its global warming impact. But, even if these technologies are effective, they will add to a cost that is already unacceptably high to the market.

A recent analysis by W. John Schmelz, Gal Hochman, and Kenneth G. Miller of Rutgers University found that the introduction of CCS technology would cost approximately $52-$60/ton of carbon emitted in coal-fired generation. That would raise the cost of coal-fired power by approximately $50/MWh over its existing cost. And it would do so in a market where the wholesale price of electricity is regularly between $20 and $30/MWh.

Recently, as part of its consideration of whether or not to join the Regional Greenhouse Gas Initiative (RGGI), Pennsylvania modeled how an approximate $7/ton price on carbon would impact various energy resources. Even at that modest level, the analysis found that electricity from coal would be virtually eliminated from Pennsylvania’s energy mix.

Other arguments that coal is necessary to the resilience and reliability of the energy system as a “base-load” resource to offset the variability of renewable resources and potential delivery issues with natural gas are also rapidly going by the wayside as energy storage and grid management technologies that take advantage of resource diversification to ensure resilience and reliability come to the fore. So, while coal-fired generation may retain a role in powering some industrial processes that require high-intensity power, it is unlikely to play a significant role in the cleaner, less expensive, and more reliable power grid toward which the nation is transitioning.

If nothing else, the sheer number of companies, banks, and investment firms that are adopting corporate sustainability goals, nearly all of which include carbon reduction goals, should concentrate the minds of West Virginia policymakers on the need to transition to clean energy if the state is to have any hope of attracting major companies and employers to the state. Already, many companies such as Microsoft and Google could not locate in West Virginia and meet their sustainability goals because of the state’s coal-heavy electric system.

The following graphic from KPMG’s Survey of Sustainability Reporting 2020 powerfully illustrates how widespread corporate commitments to sustainability generally and to combating climate change in particular have become.

Even American Electric Power, the utility that owns Wheeling Power and Appalachian Power, both West Virginia subsidiaries, has committed to reducing carbon emissions by 80% by the year 2030.

But, rather than recognize and adapt to the direction in which business and the nation are going, some members of the West Virginia legislature seem determined to push back, even if doing so costs the state and its residents. The current legislative session saw the introduction in the House Energy and Manufacturing Committee of House Concurrent Resolution 90, which in the words of the Charleston Gazette-Mail, “. . . would direct the committee to study the effect of the Board of Trustees of the West Virginia Public Employees Retirement System identifying all businesses that have divested from fossil fuel companies in which the system has holdings, putting them on a ‘restricted business list’ updated at least annually, and notifying those businesses that the system may divest holdings from them.”

Imagine the terror this will strike in the hearts of businesspeople forced to choose between the West Virginia Public Employees Retirement System and the rest of the world.

What West Virginia can do

Coal-fired electricity generation’s economic challenges make its environmental problems almost irrelevant to the question of whether or not electricity from coal can continue to play a major role in the energy system and in West Virginia’s economy. That being the case, policymakers are confronted with the question of what they can do going forward to stabilize West Virginia economically and ensure that the state at least remains a player in the energy industry.

The most astute strategy would be to leapfrog the state from its current coal-based energy system to a system built on renewable resources including wind, solar, battery storage, and pumped hydro. A roadmap for doing so is outlined in a recent report titled, “West Virginia’s Energy Future“ from the Center for Energy and Sustainable Development at the West Virginia University College of Law.

The report finds that West Virginia can dramatically increase renewable energy production over the next 15 years and generate 70% of the state’s electricity from wind and solar by 2035. There is also a collateral benefit according to the report. The transition to clean energy will result in a net gain of over 1,100 jobs.

The economic benefits, especially the number of jobs, may be even greater if West Virginia makes a concerted effort to improve energy efficiency. At present, West Virginia consumes 20% more electricity on a per-capita basis than the US as a whole, making it a primary reason why West Virginians’ utility bills are 5% higher than the national average.

Energy efficiency is a great engine for economic growth, first because it’s two to three times more labor-intensive than investments in fossil fuels and utilities. That means more jobs are created for every dollar invested. Second, energy efficiency benefits local economies because the companies and workers that provide energy efficiency services in fields like HVAC, insulation, lighting, and appliances tend to be local. Third, energy efficiency makes the electric grid more flexible and resilient because it reduces demand, especially during peak periods. Energy efficiency also reduces pollution and saves a lot of money in the long run because it obviates the need to build more and more power plants.

Finally, a public commitment by West Virginia policymakers to a clean energy transition will bring the state immense attention while also putting it on the radar screen of all of those companies whose sustainability commitments would otherwise not allow them to even consider West Virginia for expansion.