Meeting the Climate Challenge in the Ohio River Valley 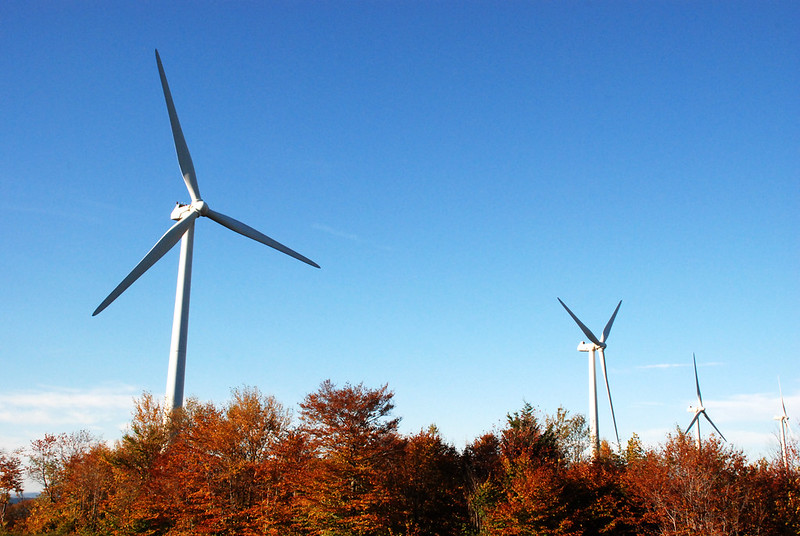 Climate change is the single biggest challenge of the 21st century. The global community has just ten years to cut greenhouse gas emissions by half and less than thirty years to build a sustainable, carbon neutral economy that can protect the planet and public health and build shared prosperity so future generations are not left in the dust. The climate challenge means that over the next several decades we must replace our current energy system that is dominated by fossil fuels with a system of clean renewable resources that is highly efficient. Left unmitigated, rising temperatures will cause unspeakable devastation.

Since economies in the Ohio River Valley of Appalachia, especially West Virginia, are heavily dependent on fossil fuel extraction , it will be imperative to get ahead of the curve by recognizing where the new energy economy is going and adapting to build a strong economic future.

The Fossil Fuel Economy of the Ohio River Valley

The mid and upper Ohio River Valley region — which encompass eastern Ohio, central-eastern Kentucky, western Pennsylvania, and West Virginia — has long depended on extractive fossil fuel industries as a source of good paying jobs, tax revenues, and economic growth.  As such, the economy has been heavily dependent on external demand and volatile energy prices that have created a boom and bust economy in which other industries have been crowded out, leaving the region poorer with a less diverse economy and an underdeveloped workforce. Scholars often refer to this vicious cycle as a “resource curse”, which results in places failing to adequately benefit their natural resource wealth, resulting in slower and uneven economic growth. West Virginia is a good example of a place where natural resource extraction has failed to produce shared prosperity.

While most states in the region are not as dependent on extractive industries as they were in the past, fossil fuels continue to play an outsized role in the Ohio River Valley region. In 2019, Ohio, Pennsylvania, and West Virginia produced about 30% of the nation’s natural gas while West Virginia and Pennsylvania ranked second and third in coal production, respectively. 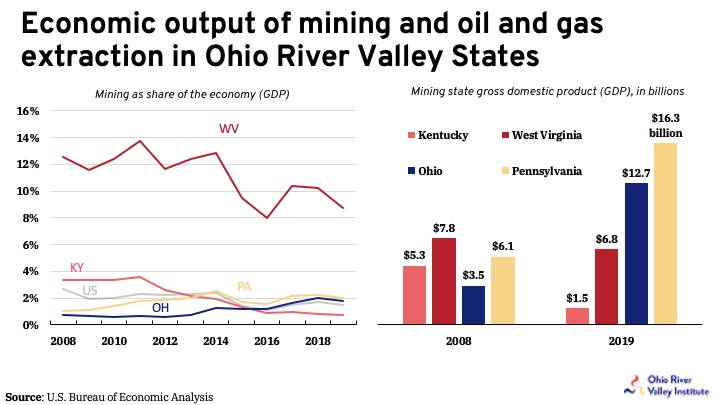 One way to gauge dependency on natural resource extraction is by looking at gross domestic product (GDP) in the “mining sector” (21), which includes coal mining, oil and natural gas extraction, other mineral and rock mining (e.g. iron, copper, stone), and support activities. Among the four states, West Virginia is the most dependent on the mining sector. Coal mining, oil and natural gas extraction make up 9 percent of the state’s economy or nearly $7 billion in GDP.  Although West Virginia and Kentucky have become less reliant on the mining sector over the last decade due to the collapse in coal production, Ohio and Pennsylvania have seen rapid growth in their mining sectors thanks to the explosion in shale gas extraction. Both Ohio and Pennsylvania have larger mining sectors than West Virginia – a trend that began around 2015.  West Virginia’s fossil fuel energy economy has undergone a seismic shift since the shale boom, with natural gas and oil extraction now producing more economic output than the declining coal sector. 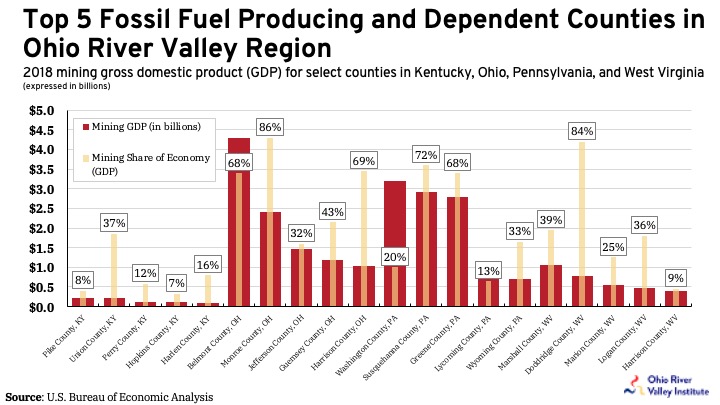 In Pennsylvania, Susquehanna County has a mining GDP of $2.9 billion, accounting for nearly three-fourths or 72% of that county’s economy. The two counties most dependent on oil and natural gas extraction are Doddridge County, West Virginia, with 84% of the county’s economy comprised of the mining sector, and Monroe County, Ohio at 86%. In contrast, only a few counties in Kentucky remain heavily dependent on coal, including Union County in the western part of the state, which produced 20% of the state’s coal in 2017.

In terms of employment, fossil fuel production and ancillary industries make up a small share of private employment in the four states, from 0.6% in Ohio to 6.2% in West Virginia (2019). That said, they are still a source of good paying jobs in rural areas of that tend to rely more heavily on goods producing industries. 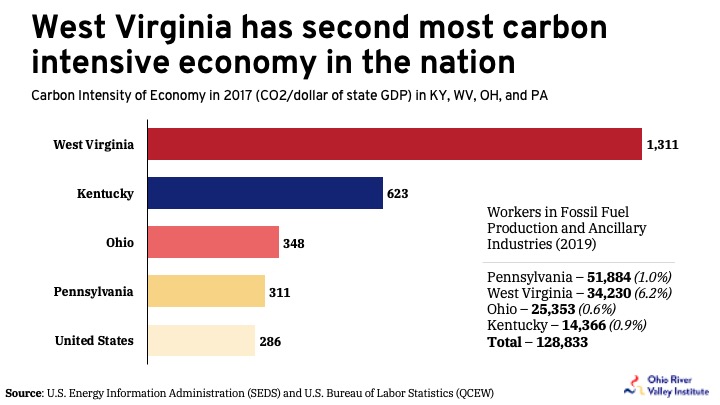 Another way to assess the region’s reliance on fossil fuels is by looking at energy-related metric tons of carbon emissions per dollar of state GDP. According to the Energy Information Administration (EIA), all four states have more carbon intensive economies than the nation as a whole. West Virginia has the second most carbon intensive economy in the nation, while Kentucky’s economy is three time more carbon intensive than the US average. This is mostly due to the fact that Kentucky and West Virginia rely heavily on coal-fired electric power generation whereas Ohio and Pennsylvania that rely more on natural gas, nuclear, and renewable energy.

Decarbonizing one of the nation’s most carbon-intensive regions

On top of looking at the jobs and economic output of carbon-based industries, it is important to also examine how much carbon pollution the region produces and the sources of emissions in order to develop a plan for decarbonizing the region’s economy.

Carbon emissions have fallen nationally and in the region from their peak in 2007. This was mostly due to the Great Recession (2007-2009), the replacement of coal with natural gas and renewable energy (mostly wind power), increased energy efficiency, and changes in the transportation sectors (more fuel efficient cars).  However, the four states in the region are above the US average in per capita energy consumption and carbon intensity. 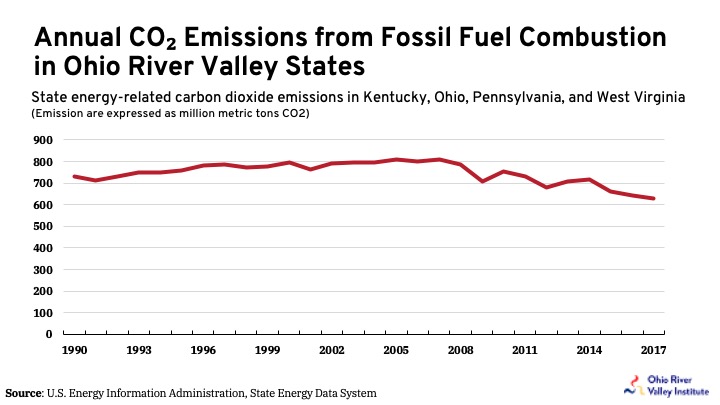 In 2017, West Virginia produced over 50 metric tons of carbon per person (US average was 16),  second highest in the nation. Pennsylvania emitted 17 tons per person, Ohio 18, and Kentucky 26.  In 2018, Pennsylvania, West Virginia, and Ohio ranked second, fifth, and tenth in per capita energy production. 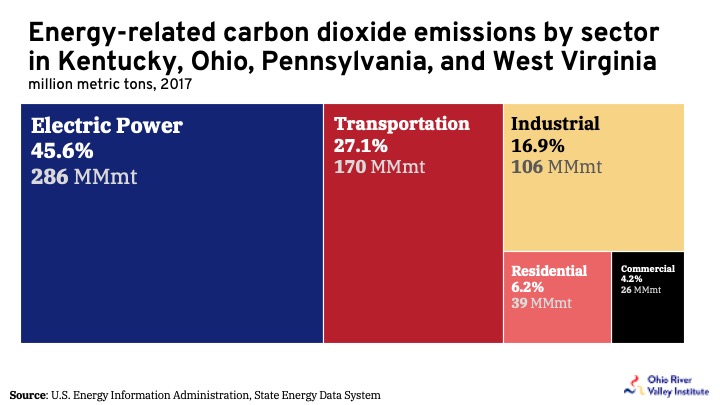 In terms of electricity generation in the region, half comes from coal, with natural gas and nuclear making up around 22%, and renewable energy just 4%.  In West Virginia, 94% of the electricity generated comes from coal compared to 23% in Pennsylvania.  While Pennsylvania generates the most renewable energy among the states, it still comprises less than 5% of its electric power generation. Kentucky has the highest mix or share of renewable electric power generation at 5.3%, while Ohio is at just 2.1%. Both Ohio and Pennsylvania also rely heavily on nuclear power, making up 16.2% and 43.5%, respectively. 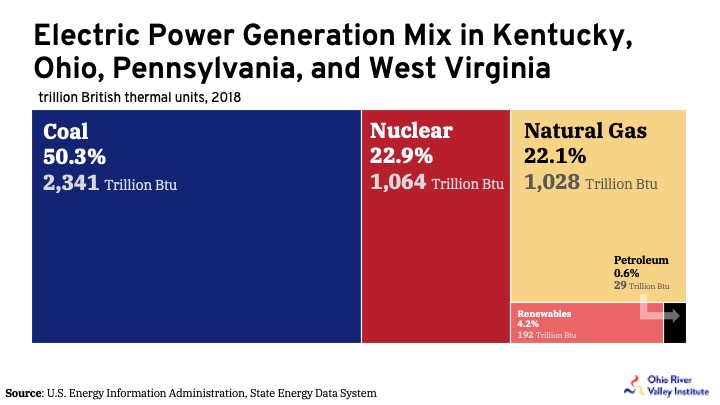 While drastically reducing carbon emissions in the region will require large-scale policy changes across multiple energy sectors, it is attainable. It will most likely require policy action from local municipalities to the federal government, and even perhaps on a global scale. The bad news is that many states are way ahead of the Ohio River Valley region in making this a reality. The good news is that with the right policies in place, which include large-scale public investment and a just transition for fossil fuel workers, it’s possible to build a stronger and more sustainable economy in the region and also create thousands of new good paying jobs.

Over the next year, we will be exploring the policy solutions needed to meet the climate challenge. This will include policies targeting 100% clean energy in cities and states, energy efficiency, legacy costs of coal and natural gas extraction, upgrading the electrical grid, electrical vehicle infrastructure and passenger rail, carbon absorption and sustainable agriculture, universal broadband, green manufacturing,  and public works, to name just a few. Our region needs a New Deal or Marshall Plan type plan that works for all of us and it will take all of us working together to make that happen.