REGROW Act Could Provide $1.7 Billion to Clean Up Hazardous Wells in Appalachia 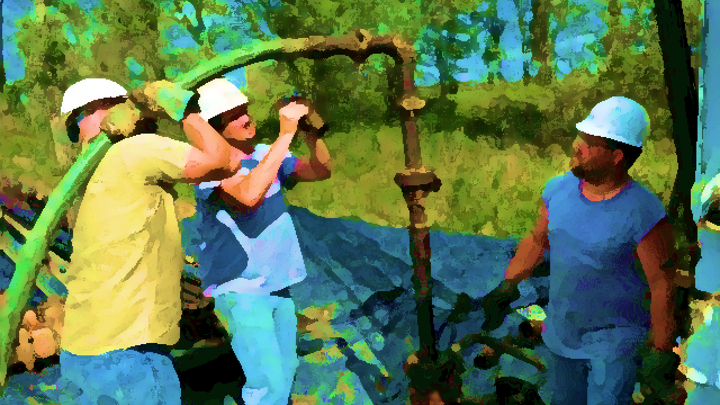 In early April, we released a report outlining the benefits of plugging and cleaning up orphan and abandoned oil and gas wells in Appalachia. Since that time, there have been several bills introduced in Congress to address the issue. These include the Orphan Well Cleanup and Jobs Act (HR 2415) in the House and the REGROW (Revive Economic Growth and Reclaim Orphaned Wells) Act of 2021 in the Senate (S.1076) and House (HR 3585).  The REGROW Act is similar to legislation that was introduced in 2020 by Rep. Thompson (R-PA) and provisions that were included in the Moving Forward Act that passed the House in July of 2020.

The Orphan Well Cleanup and Jobs (OWCJ) Act of 2021, which passed out of the House Natural Resource Committee on a party-line vote, contains $8 billion in funding for orphan well cleanup ($7.25 billion for states and private land, $700 million for public and tribal lands, and $50 million for research, implementation, and development) along with increases in bonding for wells on public lands and an annual fee for idled wells on public land. (You can read ORVI’s testimony here).

The REGROW Act in the House and Senate are identical, and both have strong bipartisan support. They each provide $4.275 billion for orphan well cleanup on state and private lands, along with $400 million for public and tribal lands, and $32 million for related research, development, and implementation. Last month, a bipartisan group of governors from 12 states – including West Virginia, Kentucky, Ohio, and Pennsylvania – sent a letter to the Senate Committee on Energy and Natural Resources endorsing the REGROW Act. The number of jobs created from the REGROW Act could range from 25,000 up to 50,000, based on estimates derived from research by Resources for the Future.

The amount of funds that would be distributed to state orphan well programs in the REGROW Act is based on a formula that includes the number of oil and gas jobs lost between March 1, 2020 and when the bill is enacted and the number of documented orphan wells in each state. While there are an estimated 2.1 million onshore unplugged abandoned oil and gas wells in the United States, states have only documented a small fraction of these wells.

According to the Interstate Oil and Gas Compact Commission (IOGCC), there were approximately 61,728 documented orphan wells across the U.S. based on 2018 and 2019 data. The Ohio River Valley states of West Virginia, Kentucky, Ohio, and Pennsylvania comprise 44.3 percent, or 27,369, of the documented orphan wells. States estimate there could be an additional 211,000 to 746,000 orphaned wells.

The cost to plug and clean up the estimated 62,000 documented orphan wells could range from $1.5 billion to more than $3 billion based on typical costs. In the process of implementing this work over the next decade, states, tribes and the US Dept. of Interior that oversees federal land would likely add many more orphan wells to their inventory. Thus, it is highly likely governments would easily be able to use all of these funds to plug and restore well sites.

While it is difficult to project how the funding formula would ultimately be constructed in the REGROW Act, the table below uses current estimates of documented orphan wells and the share of upstream oil and gas jobs lost from March 2020 to December 2020 (the latest available data). If the state portion of funding was based solely on the number of documented wells, the four states in the Ohio River Valley (PA, KY, WV, and PA) would receive about $1.9 billion over the next eight or more years. If the funding formula allocates 90 percent of the $4.275 billion based on documented orphan wells ($3.42 billion) and 10 percent on the share of jobs lost ($855 million), the four states would receive approximately $1.7 billion in state grants. 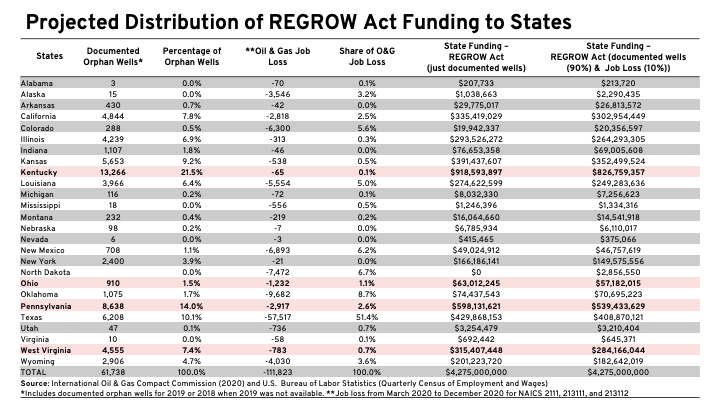 The maps below show the geographical distribution of the documented orphan oil and gas wells in West Virginia. According to the latest well data from the WV Department of Environmental Protection (WVDEP) prepared by Downstream Strategies, there are approximately 4,577 documented orphan wells in West Virginia. The large majority of these wells are in the northwestern part of the state, where the current boom in shale drilling is taking place and where the first oil boom took place in the late 1800s.


Based on our previous analysis, plugging and cleaning up the estimated 4,577 orphan wells would cost approximately $247 million, or about $54,000 per well. This investment would create up to 300 jobs per year over ten years and reduce methane emissions by 595 tons, the equivalent of 15,000 tons of CO2, per year. More than half of the documented orphan wells in West Virginia are in the state’s first congressional district. Ritchie County, West Virginia has the highest number of documented orphan wells at 776, while the state’s largest county, Kanawha County, has 201 orphan wells.

The REGROW Act and other federal bills aiming to address the orphan wells crisis are a positive step toward addressing a portion of the country’s orphan well crisis, but more will have to be done to address the second wave of abandoned and active wells where states have been unable to adequately hold companies accountable for billions in clean up costs. A more robust federal program, that includes a production fee, will be needed to fully address the millions of wells and the tens of billions in clean-up costs across the nation.