Sloganeering politicians and CEO’s and the myth of energy independence 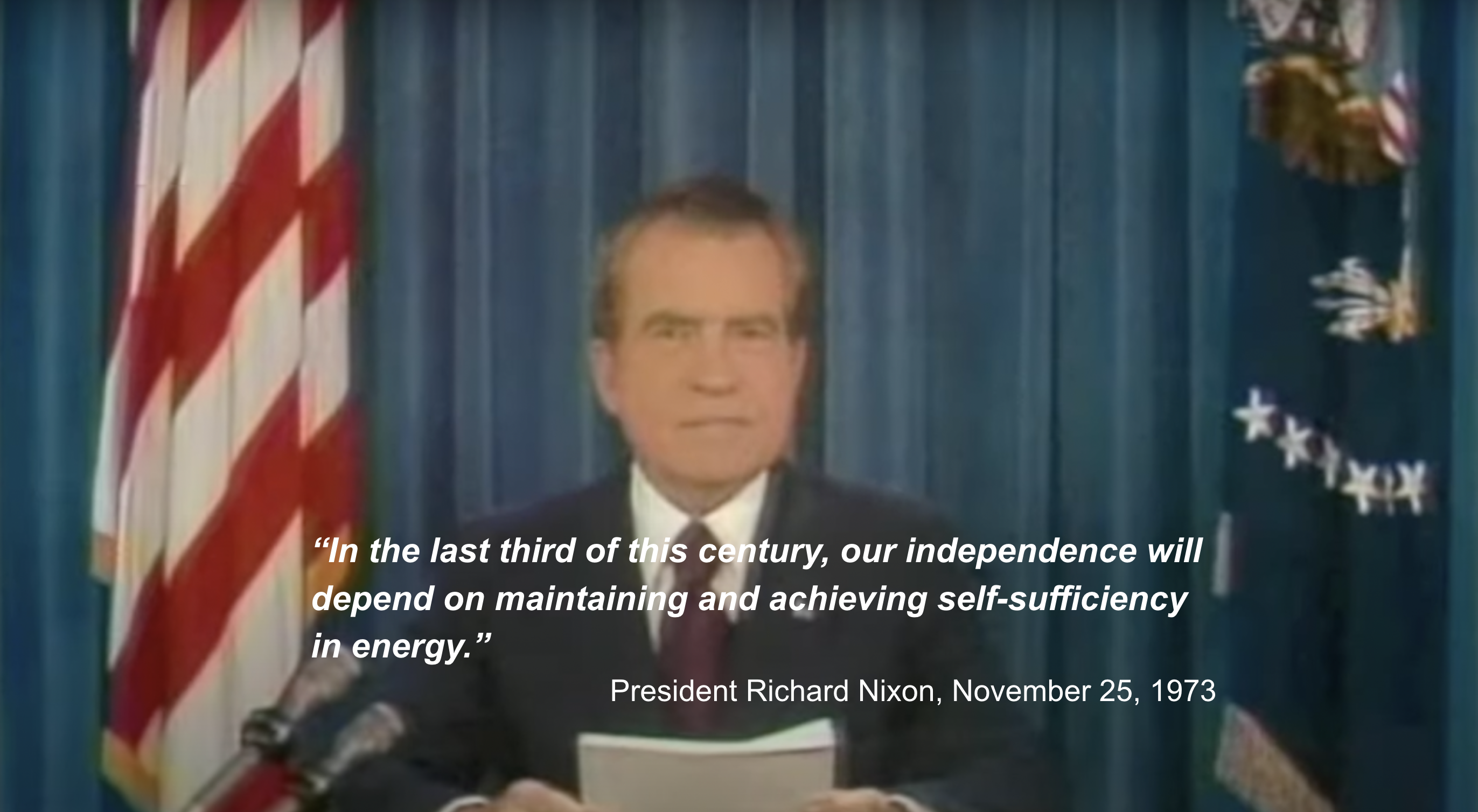 I’m old. And for nigh on to fifty years I have been listening to politicians and oil and gas executives soberly invoke “energy independence” as a a noble goal that is necessary to preserve our freedom and way of life.

Starting in the 1970s, a decade of crises and emergent wedge issues  – stagflation, forced busing, the Equal Rights Amendment, gun control – which even today largely define the lines along which we fight, energy independence was the decade’s most written and talked about issue save abortion. The Arab oil embargo, as it was then called, had plunged us into gasoline rationing, a tripling of prices at the pump, and a genuine fear that people would freeze to death in the winter of 1973 for want of home heating oil. We felt vulnerable in a way we had not felt vulnerable since World War II.

To contemporary viewers, it’s astonishing to watch President Richard Nixon solemnly address the nation about the need to conserve energy and accept compulsory sacrifice on a scale that makes the inconvenience of getting vaccinated against COVID seem trivial by comparison.

Near the end of the president’s address, which I watched as a college freshman, Nixon said, “In the last third of this century, our independence will depend on maintaining and achieving self-sufficiency in energy.”

We were told and many of us believed that energy independence was an existential necessity. But the funny thing is that the term “energy independence” never actually had a fixed meaning. The way in which it was talked about by politicians, starting with the president, and understood by most listeners was that America could, over time and with the help of the right policies, reach a stage at which we could produce enough energy domestically to meet our needs and foreign nations, principally the Organization of Petroleum Exporting Countries (OPEC) and its member states, would cease to be in a position to dictate how much energy would be available to Americans and at what price. If OPEC tried to ratchet up the price of oil, we would be in a position to say, “Keep your damn oil, we can produce all we need without you.”

But, if that was the concept politicians were selling and we were buying, it was never the one that American oil companies considered for even a nano-second. Why should they? Every time OPEC slashed production and prices rose on global markets, American producers saw profits skyrocket and, unlike OPEC, they didn’t have to reduce production volume to collect the bonus. The OPEC nations may have profited from restricting supply, but American oil companies profited even more.

The kind of “energy independence” most Americans imagined, which would have insulated us against price shocks inspired by OPEC production cuts, would have required American producers to decouple their prices from the global price of oil and sell at a domestic price based on the cost of production plus some agreed upon mark-up. But, if you were an oil executive or shareholder, where was the fun in that?

So, the American oil and gas industry openly and aggressively led the campaign to achieve one element of energy independence — the capacity to produce more oil and gas domestically than we consume. But it never bought into, nor did the federal government force upon it, the necessary accompanying principle that domestic prices should be decoupled from global prices. The closest we came was when, in the 1980s, Congress made the industry accept a brief, small, and long-since repealed “windfall profits tax” on oil.

It’s a bastardized version of “energy independence” about which politicians and CEOs babble right down to the present day. Even though the U.S. now produces more oil and natural gas than we consume, which ostensibly should make us energy independent, we are not. Today, the amount we pay for energy is every bit as dependent on decisions made by OPEC and other nations as it was in the 1970s, which is why we’re now paying rapidly rising prices for gasoline, natural gas, electricity, and heating oil . . . and American oil companies are gleeful.

The truth is that, as long as the production of energy requires the consumption of fuels, fossil or otherwise, energy independence, which really is a worthwhile goal, is unattainable. The only way in which the United States can ever be truly energy independent is by transitioning to renewable resources whose costs are not subject to the vagaries of global commodity markets.