The Failure of Fossil Fuel Subsidies in Pennsylvania 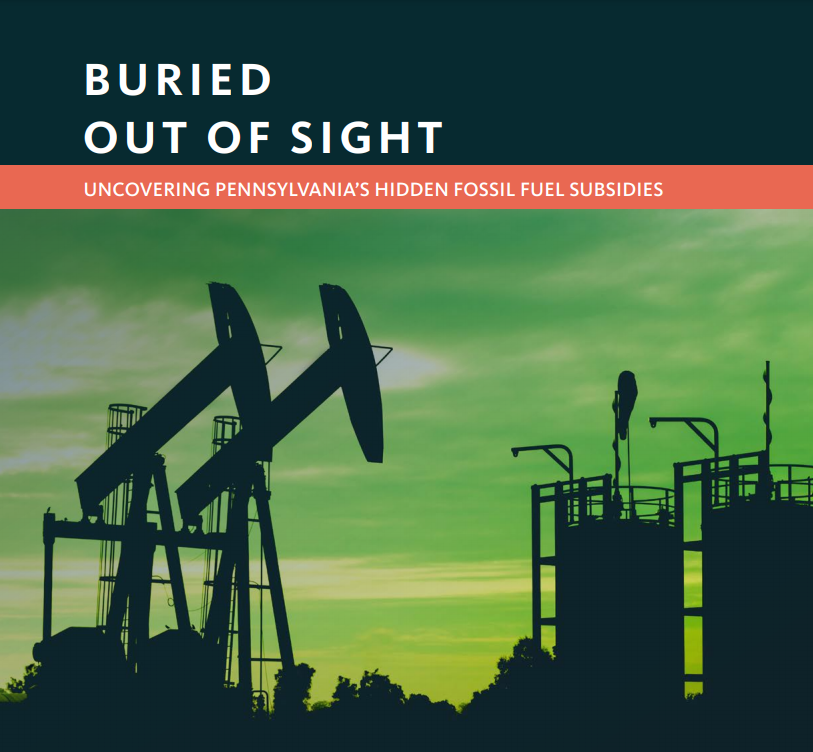 $3.8 billion is enough money to run the entire economy of a small country. But it’s just barely enough to cover the cost of Pennsylvania’s annual subsidies to the fossil fuel industry.

Those subsidies are described in painstaking detail in an excellent new analysis by PennFuture, “Buried Out of Sight.” Researchers at PennFuture were able to identify over 50 ways that state and local governments subsidize fossil fuels so extensive that the value works out to $296 for every person in the state.

The authors are quick to point out that the subsidies encourage pollution and harm the environment. What’s worse, they don’t even seem to be effective at producing real economic benefits. A little more than half the value of the subsidies went to the shale gas industry to support fracking and other activities (with the remainder split between coal and oil). One would expect, then, to see economic benefits arise in proximity to gas development, but precisely the opposite has happened.

In our recent report, “Appalachia’s Natural Gas Counties,” the Ohio River Valley Institute examined key measures of prosperity in the twenty-two major gas-producing counties in the region—income, jobs, and population. The results are disheartening:

These dismal results are exactly the opposite of what the industry predicted. Gas production in the region wildly exceeded projections, the state of Pennsylvania forked over more than $10 billion in subsidies to natural gas, and yet little of the income generated by that growth entered local economies.

Beaver County is not a major gas-producing county, but it illustrates the ineffectiveness of Pennsylvania’s subsidies. State lawmakers set up a whopping $1.65 billion subsidy on ethane sales to support the development of giant petrochemical facilities like the one Shell is building in the county. The project is still under construction and has not yet taken advantage of the tax break, but the results are not encouraging. Since 2008, as the nation expanded the number of jobs by almost 10%, Beaver County experienced zero job growth. The employment picture in Beaver County is only likely to get worse when construction of the cracker finishes because several thousand on-site workers – who now comprise around 5 percent of the country’s labor force – will have to look for new work, either in Beaver County or somewhere else.

It’s entirely possible that Pennsylvania’s multibillion-dollar annual giveaway “works” in the sense that it pads the profit margins for a few companies, but even those results are poor. Every quarter, the Institute for Energy Economics and Financial Analysis reports on the vital signs of Marcellus shale companies. The recent update shows that Appalachian frackers reported $504M in negative free cash flow during the third quarter of 2020. They spent a half-billion dollars more on drilling and building than they earned from sales.

Stock prices tell the same story. EQT, Range Resources, CNX, and the rest of the gang are all trading at just a fraction of the prices they were a few years ago. Most industry analysts have turned bearish on the sector, a sentiment that is reflected in the seemingly systematic downgrades from the big credit ratings agencies. Even the region’s much-ballyhooed petrochemical buildout, which was supposed to drive demand for gas, is in doubt. Meanwhile, the Biden Administration is renewing American climate commitments and looks set to pursue serious decarbonization policies that will permanently dampen the prospects for fossil fuel companies.

Against this backdrop, it’s hard to understand why the Keystone State would continue shoveling billions of dollars of taxpayer money at an industry that is simply not delivering results for the public. Unfortunately, Pennsylvania’s problem seems to be getting worse, not better. The $3.8 billion tallied in the report represents a 14 percent increase in the value of subsidies from the same analysis when PennFuture last conducted it in 2015.

Pennsylvania can make smarter investments with public money. The environmental damage from fossil fuels is well documented and well understood. And as the evidence becomes clearer that the industry is a lousy economic bet, too, it’s time for state lawmakers to consider new approaches that can save taxpayers money while delivering real prosperity for local communities.