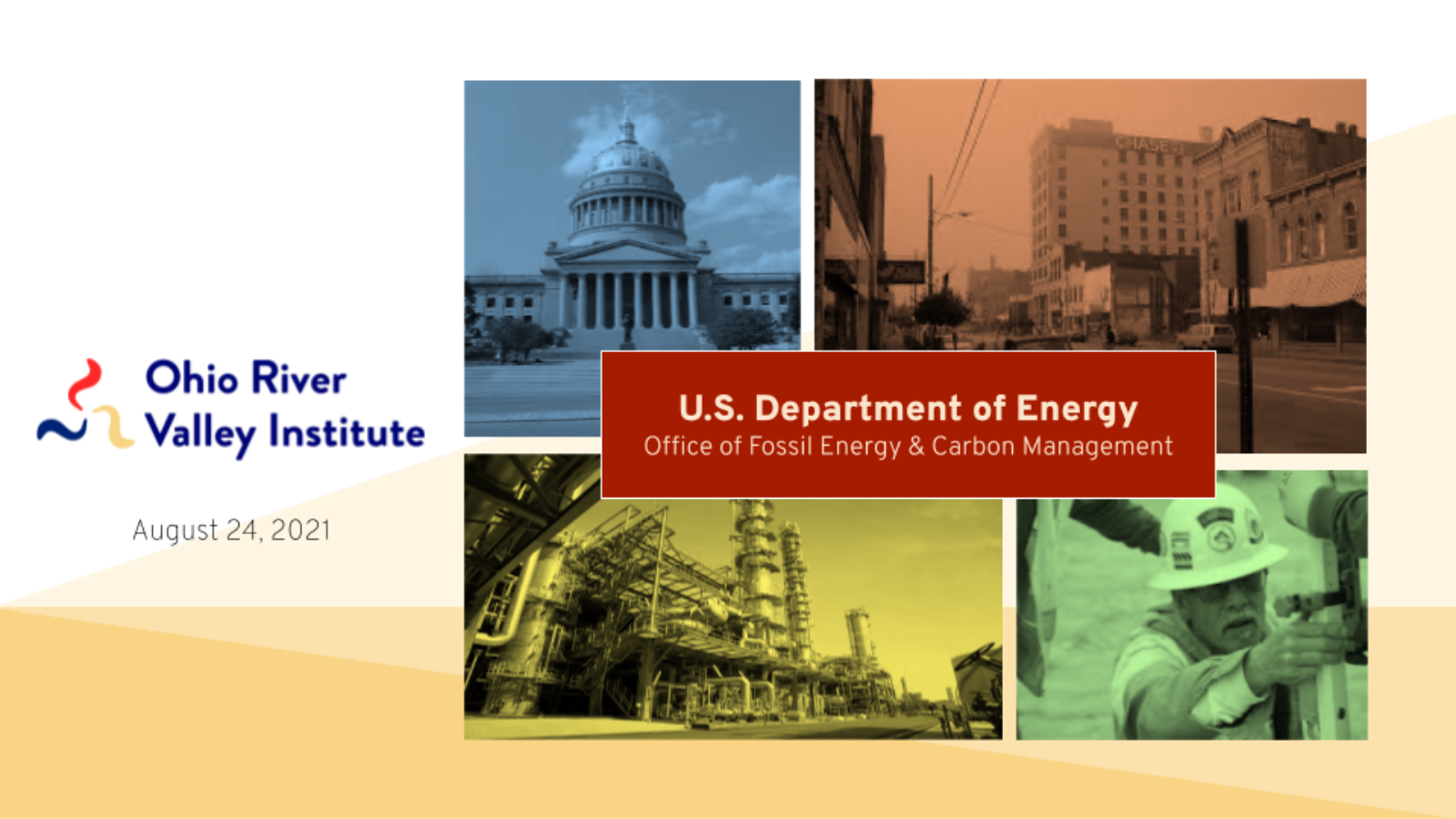 Senior Researcher Sean O’Leary explained the damaging effects of shale gas activity and prospective petrochemical development on the environment, residents’ wellbeing, and local economic growth in a public-facing presentation for the U.S. Department of Energy’s Office of Fossil Energy and Carbon Management earlier this week.

The presentation informed the Department of Energy’s public meeting to discuss the impacts petrochemical manufacturing, pipelines, and supporting infrastructure have on environmental and health conditions in local communities and on global greenhouse gas emission targets.

O’Leary’s research demonstrates quantitatively that the environmental burdens currently being placed on the region by the natural gas industry and the additional burdens that would be created by a major expansion of the petrochemical industry are not only harmful to the health and safety of frontline residents, but have also failed to produce growth in jobs and prosperity and are incapable of doing so.

Fortunately, the nation’s transition to a clean energy economy can, if wisely directed, adequately funded, and properly supported by governmental offices like the Department of Energy, become an engine for both economic and environmental revival in the distressed Appalachian region.


The public health and environmental impacts of fracking are enormous. Between 2004 and 2016, air pollution from Appalachian shale gas activity caused an estimated 1,200 to 4,600 premature deaths and generated between $12 billion to $94 billion in cumulative climate damage, depending on assumptions regarding social costs. Petrochemical development could tack on millions of tons of additional greenhouse gas emissions. The Shell ethane cracker under construction in Beaver County, PA, is projected to emit 2.2 million tons of greenhouse gases annually, the equivalent of more than 478,000 gas-powered automobiles, and additional Appalachian crackers could compound these emissions by four to five times. The emissions from these plants include toxins and volatile organic compounds (VOCs) known to cause lung and respiratory infections, heart problems, nausea, and an increased risk of cancer.

Several solutions under consideration by the Department of Energy, such as carbon capture, utilization, and storage (CCUS) and blue hydrogen, would mitigate only some of these climate and health problems. Other assertions that natural gas and petrochemical development are or can be a major source of job growth are mistaken, O’Leary’s research shows.

The Appalachian petrochemical value chain, which starts with natural gas production, has not been and is not positioned to become a driver of job growth and local prosperity.

For major gas-producing counties in Ohio, Pennsylvania, and West Virginia, the natural gas boom yielded a massive increase in economic output but virtually no gains in jobs, income, and population. Between 2008 and 2019, GDP growth in the region’s 22 major gas producing counties exploded to three times the national average, yet growth in jobs and income was anemic and population actually declined. Economic impact studies claimed the natural gas boom would produce hundreds of thousands of new jobs. In fact, only 5,700 jobs were created, and many of the largest gas-producing counties experienced net job loss. 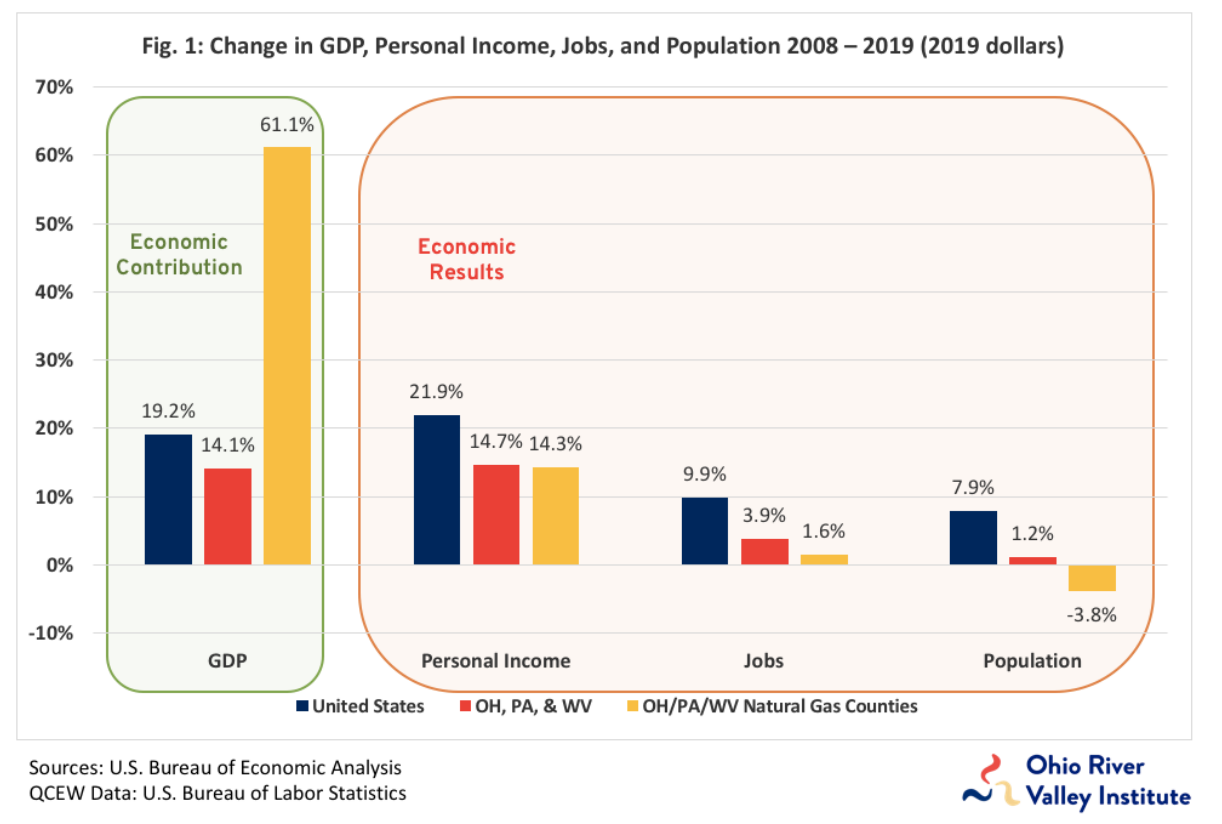 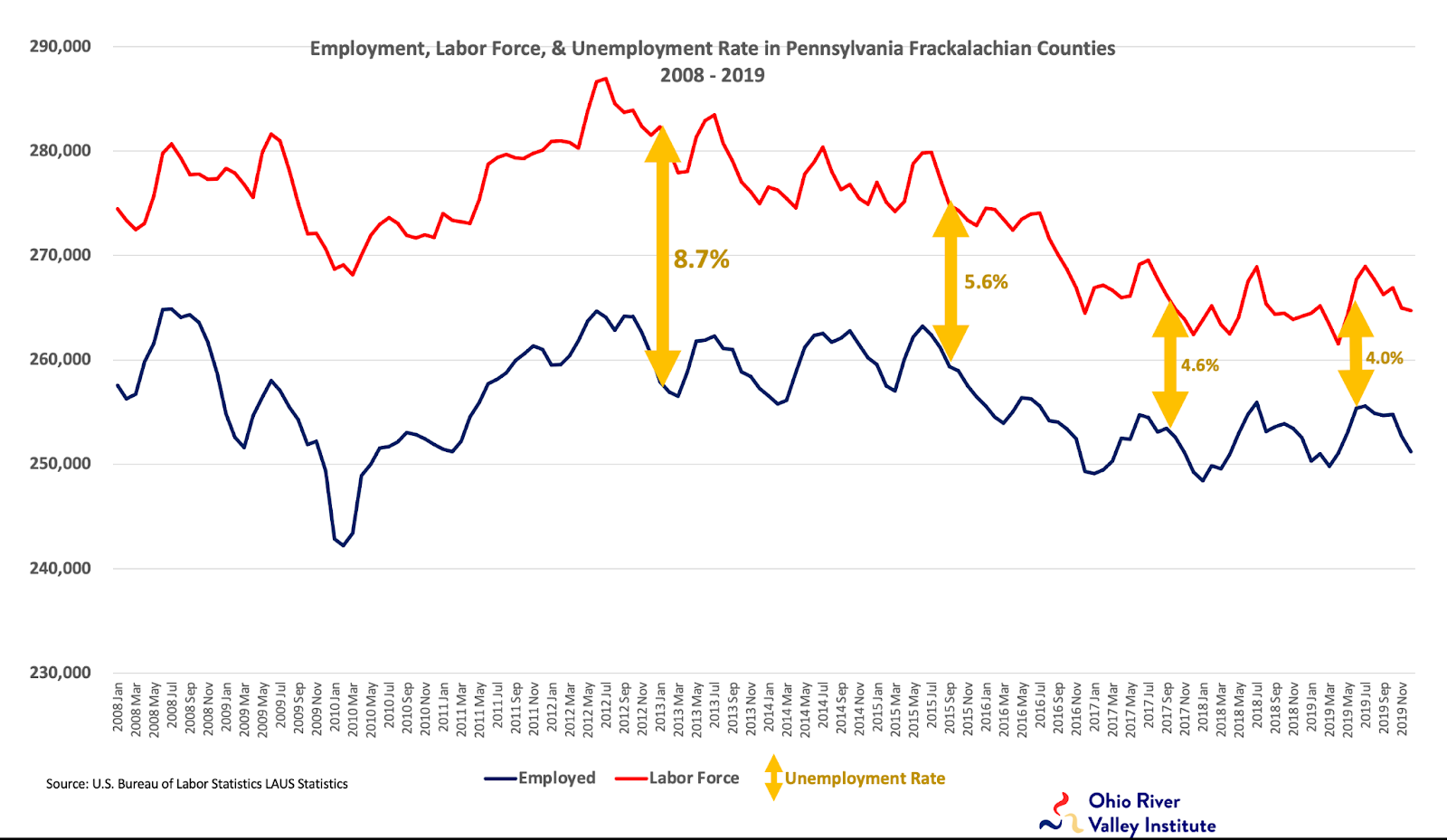 The reasons why the natural gas boom failed to deliver job growth are structural and they also afflict the petrochemical industry. So, even in the unlikely event that a major petrochemical expansion takes place in Appalachia, it too is unlikely to help the region recover economically.

Natural gas and petrochemicals are structurally incapable of delivering significant job growth. Many of the reasons why the Appalachian natural gas boom failed to deliver prosperity to local economies also apply to the petrochemical industry:

That’s why, despite immense growth as measured by GDP, neither jobs nor income grew significantly and population declined. It’s the very definition of the resource curse.

The structural nature of the problem is demonstrated by the immense disconnect between per capita GDP and per capita  income that has arisen in the region since the fracking boom began. Were Appalachia’s 22 major natural gas counties aggregated to form a state we’ll call “Frackalachia”, they would simultaneously rank among the top 10 states for per capita economic output and the bottom 10 for per capita income. That’s despite the fact that in the U.S. economy per capita output and income almost always go together, as reflected by the two lists sharing 13 states. 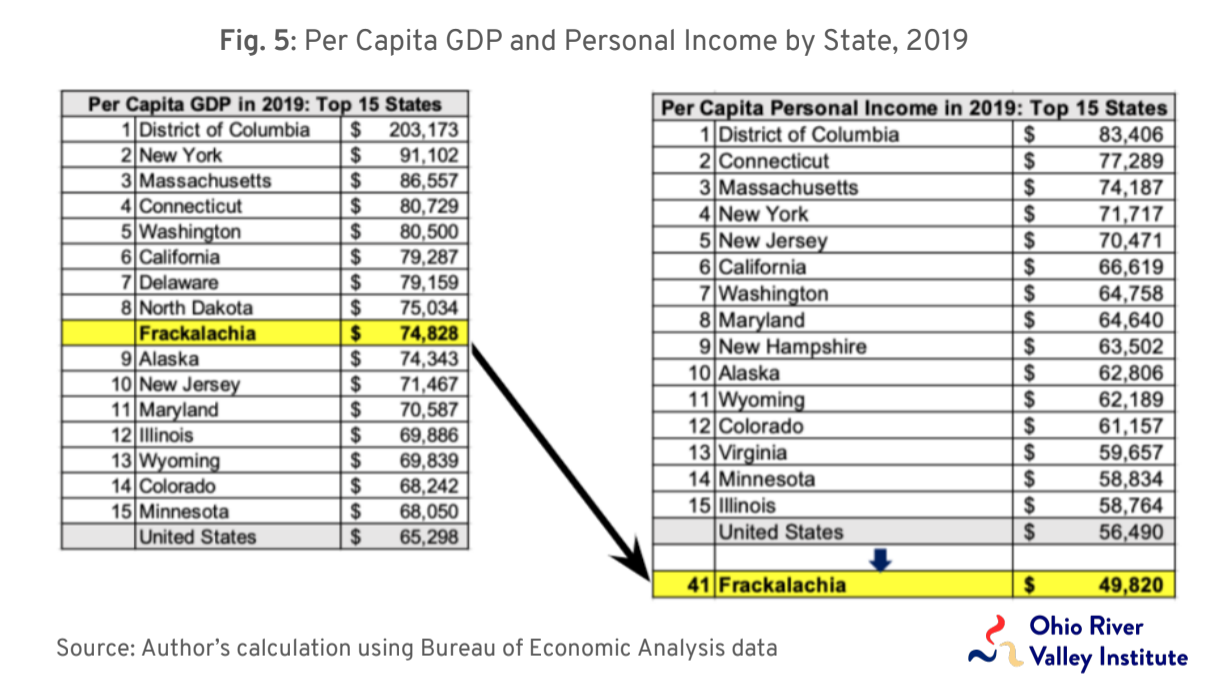 During the Trump administration, DOE aggressively promoted Appalachian petrochemical expansion and frequently relied on an American Chemistry Council economic impact study. But, four years after the study came out, only one of the nine anchor projects it identified is under construction—the Shell cracker in PA—and no additional projects have begun in the last six years. The reasons for this failure were discussed in a 2020 letter to the governors of OH, PA, and WV by eight prominent economists and analysts from the region’s leading universities. The reasons include:

It is also noteworthy that in 2010 the Appalachian natural gas boom was similarly heralded as an economic game-changer by a frequently cited American Petroleum Institute economic impact study which predicted the addition of 250,000 new jobs in PA and WV. Instead, most of the region experienced depopulation and job losses.

DOE can be a major force in helping Appalachian counties and communities achieve job growth and prosperity by investing in clean energy transition, including energy efficiency and renewable resources.

Which county’s employment growth would you rather have? 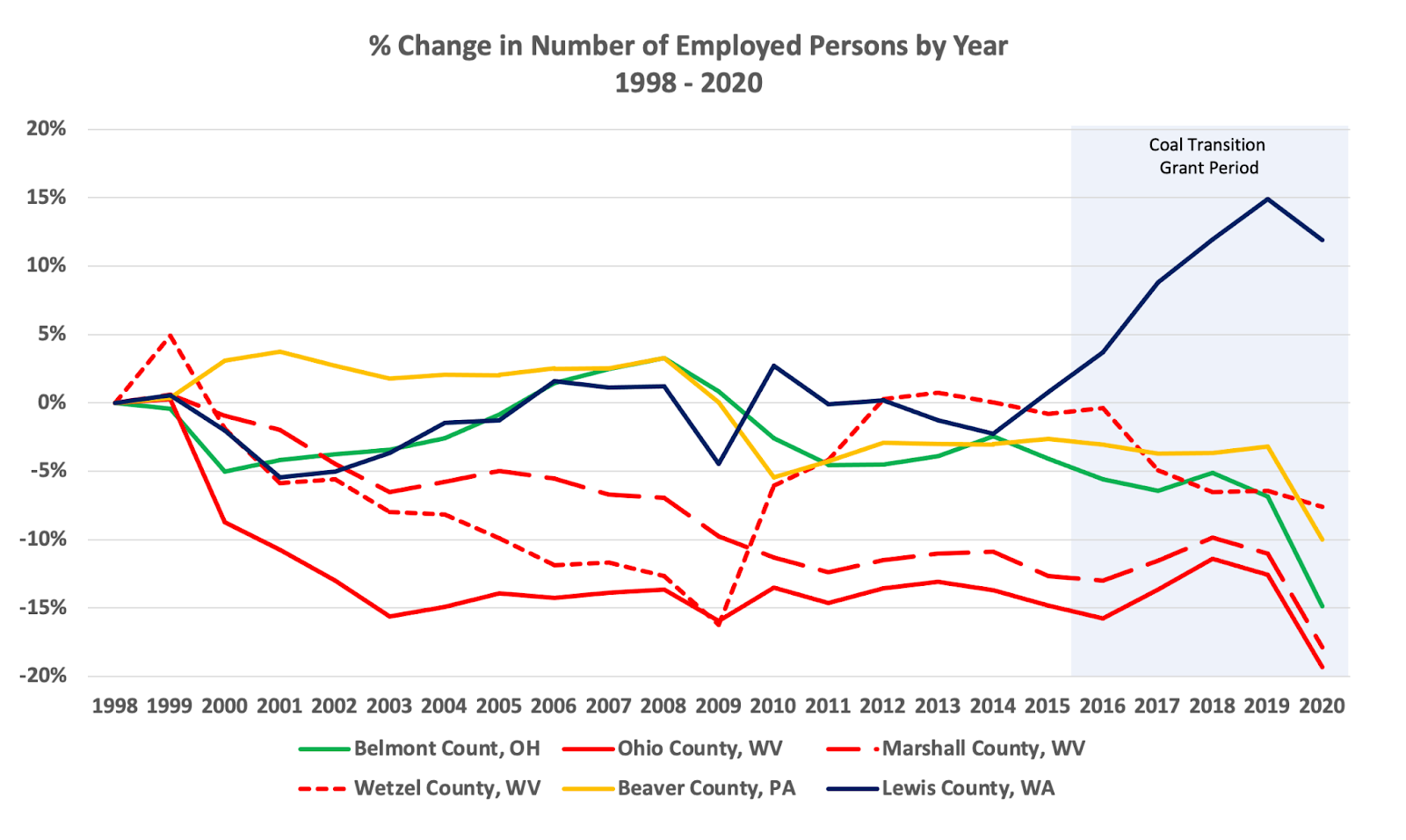 In 2014, six counties had experienced negative  employment growth over the previous 16 years. Four of these counties — those in red plus Belmont County, OH in green — became major Appalachian natural gas-producing counties during  the fracking boom, and a fifth county, Beaver County, PA, in yellow, is hosting construction of the Shell cracker plant. Yet, only Lewis County, WA (The Centralia Micropolitan Statistical Area), in dark blue, did not host a major natural gas and petrochemical expansion or any other major industrial expansion. But it alone saw major employment growth. How?

Centralia, WA is a town of 18,000 and the hub of Lewis County, population 80,000. In 2006, Centralia lost its largest employer, a coal mine that employed 600 workers. Then, it learned that by 2025 it would lose its other anchor employer, a coal-fired power plant that once employed 370. But, in 2016 an economic transition program began distributing $55 million in grants through a “Weatherization Fund” that supports energy efficiency upgrades; an “Economic & Community Development Fund” that supports workers, families, businesses, and organizations; and an “Energy Technology Fund” that supports clean energy generation, energy efficiency, storage, and transportation electrification.

Why was Centralia’s model so powerful?

The Centralia model is replicable in Appalachia . . . with DOE’s help.

We should recall the decades and billions of dollars squandered on “clean coal technology” and confine CCUS and blue H2 innovation to hard-to-electrify sectors that have some prospect of economic feasibility.

What role should technologies like CCUS and blue H2 play?

“The best environmental thing we can do on a large scale is to have everything running on natural gas.” —Perry Babb speaking at Appalachian Hydrogen & Carbon Capture Conference in April, as quoted by the Pittsburgh Post-Gazette

In fact, there are just a few hard-to-electrify industries in which the underlying fossil fuel resources may be practical and competitive. These include highly energy intensive industries, heavy transport, some space heating, and a few other niche industries.

They do not include high volume applications such as electricity generation and automobiles. The only scenario in which fossil fuels supplemented by CCUS and hydrogen can be competitive for private industry is if taxpayers are forced to underwrite the incremental cost. That would result in inefficient energy resources that are dependent on public subsidies on the front end for R&D and public subsidies on the back end for implementation and operation, with little or no incremental job growth in between. 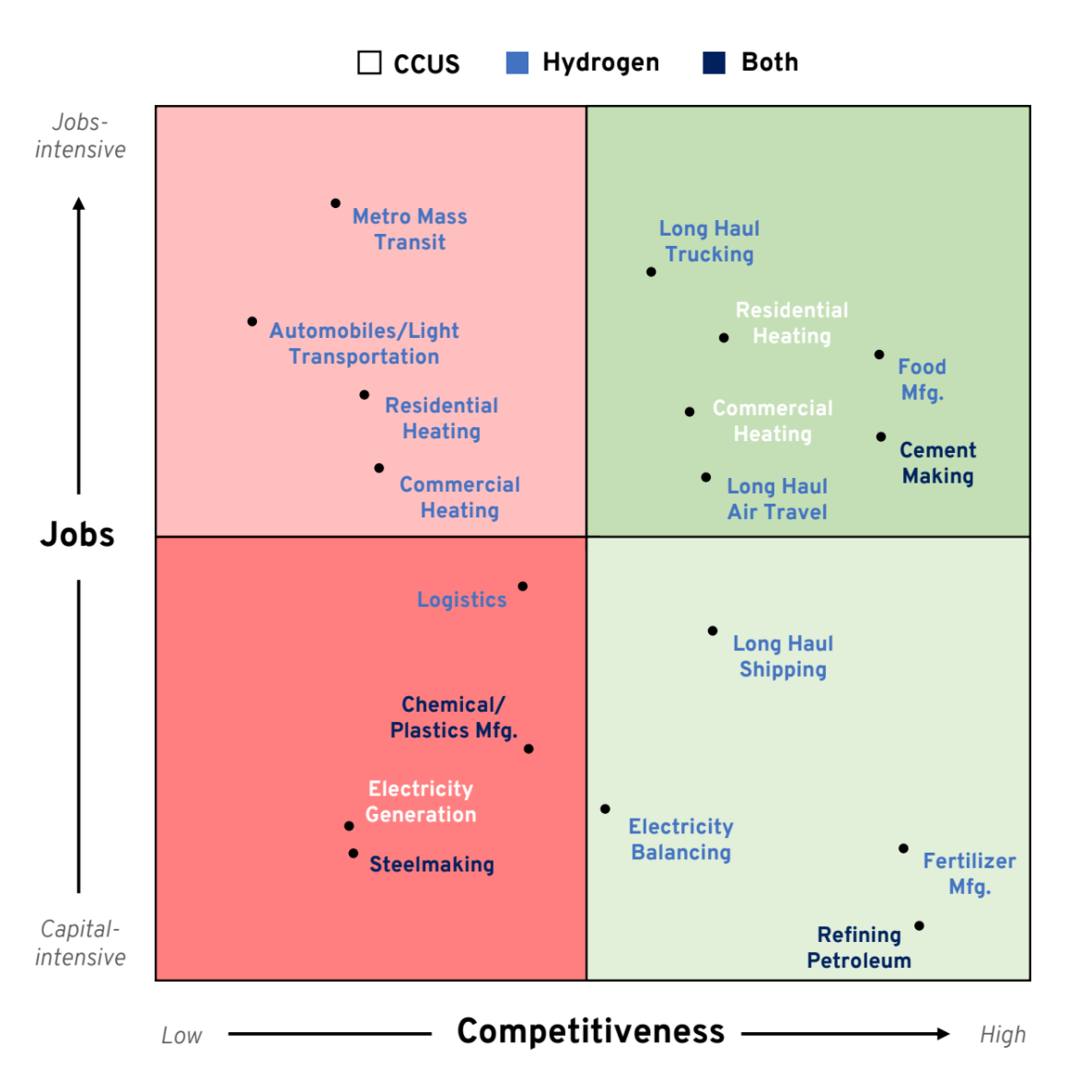 The economically and environmentally responsible sound approach to natural gas and ethane development is to cap and mitigate. Recognizing that fossil fuel resources currently play a major role in our energy system, our most cost-effective path to decarbonization is to cap fossil fuel infrastructure development to the degree possible, while also tightening down the very leaky supply chain. While recommendations have been made that could reduce greenhouse gas emissions by ~65% from current EPA inventory levels, a recent analysis found that the current EPA inventory understates emissions by ~60%, meaning that even more aggressive measures and enforcement will be required. Such measures will increase the cost of natural gas and will accelerate the transition to clean, renewable energy resources for power generation, which, on a levelized cost basis, are already equal to or lower in cost than natural gas.