For more than 200 years, the coal industry extracted billions of tons of coal in the US, damaging thousands of acres of land and water and leaving much of it unreclaimed. In this report, I demonstrate why it is critical to address the damaged sites that remain: they threaten the injury and death of residents, deter development, harm local ecosystems, and contribute to climate change. I also estimate the cost of cleaning up the remaining damage and project future reclamation program revenues. I estimate the number of jobs required to repair this damage and investigate the pay of common reclamation occupations. I close the report with a series of policy recommendations. 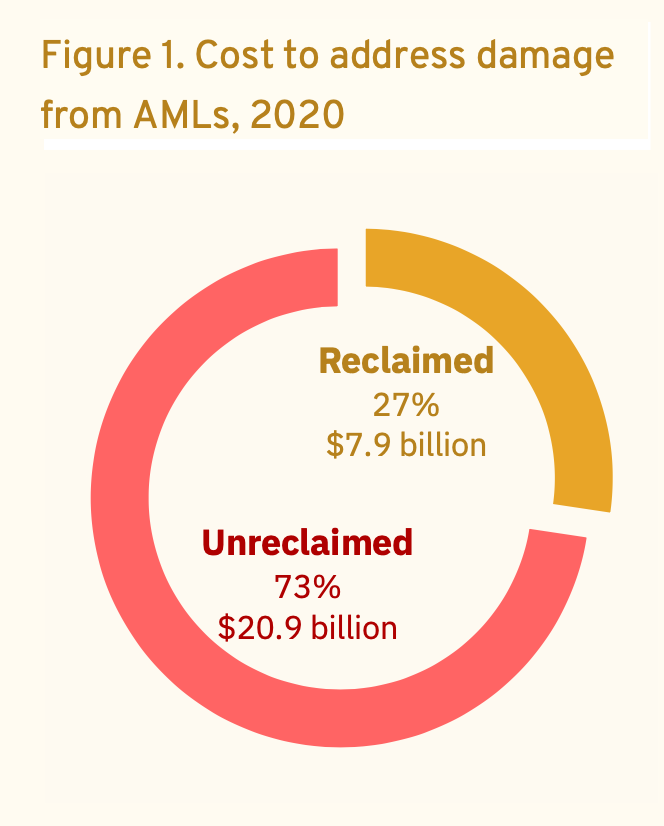 In 1977 Congress created the Abandoned Mine Land (AML) program to repair the damage of the coal industry prior to the genesis of the AML program. Since 1977, 978,000 acres and $7.9 billion worth of this damage has been cleaned up (see figure 1). The AML program has remained severely underfunded relative to the massive backlog of unreclaimed damage: in more than four decades, the program has cleaned up only 27% of total damage as of 2020. Congress chose at multiple junctures to keep AML fee levels low, rather than prioritize the cleanup of extensive damage to the land, air, and water of rural, persistently poor communities. Now, the coal industry is rapidly declining and with it the ability to finance the AML program through fees on coal production.

I estimate that there are $20.9 billion in unreclaimed AMLs remaining, as of 2020 (medium scenario estimate). This estimate is much larger than the $11.0 billion in costs listed in the federal AML inventory because I A) use a method based on more recent average cost estimates and adjust for inflation, and B) include design and administration costs (not just construction costs, as in the federal inventory). As more AMLs are discovered or deteriorate amidst impacts from climate change, I project that $5.4 billion in unreclaimed AML costs will be added to the inventory over the next 30 years, bringing the total unreclaimed cost to $26.3 billion by 2050 (medium scenario). See figure 2 for these cost estimates.

The program already faces a funding shortfall relative to expected reclamation costs. If the current AML fee levels are reauthorized through 2050, I project an estimated $0.7 billion in 2021-2050 collections, meaning the AML program’s revenue gap will balloon to an estimated $25.6 billion by 2050 (medium scenario).