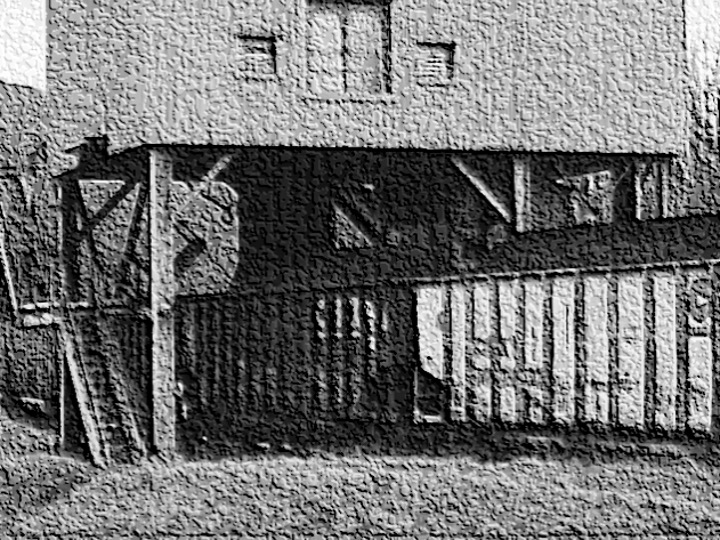 Several weeks ago, the United Mine Workers of America (UMWA) released their plan for “Preserving Coal Country” amid national policy efforts to address climate change and regrow the economy with large-scale infrastructure investments. The UMWA plan listed several policy proposals to help coal mining communities, including a ‘true transition’ for coal miners that have lost their jobs as the country has moved toward cleaner energy. This included wage replacement, health and pension coverage, tuition assistance and workforce training and certification, and other investments.

While it is unclear if federal climate change and infrastructure legislation will include these proposed transition investments, states like West Virginia could do something similar to help struggling coalfield communities and workers who are dislocated by the shifting economy. This could build on other federal efforts to revitalize coal communities. One way to do this would be to scale back or eliminate the state’s tax subsidy for thin-seam coal production and direct these funds to a coal worker dislocation and revitalization fund.

Since 1997, any new underground coal mine in West Virginia that extracts coal from seams less than 45 inches qualifies for a reduced severance tax rate. While the statutory severance tax rate is 5 percent, the rate for coal mined from seams between 37 and 45 inches is 2 percent and 1 percent for coal mined from seams less than 37 inches. It is widely understood that most—if not all—of the coal being mined at these reduced rates is metallurgical coal.

Metallurgical coal, or coking coal, is premium bituminous coal with a high carbon content that is used in the process of creating coke to make steel. It typically sells at a much higher price than the thermal coal used to produce electricity. Metallurgical coal, which is often referred to as “met coal”, has seen a lot of volatility in prices over the last few years, increasing by 70 percent from 2016 to 2019, from $82 to $140 per ton. As the chart below shows, the price for a ton of met coal is typically three to five times higher than non-met coal. While met coal prices by state are unavailable, the average sales price of coal in West Virginia was $73 per ton in 2019, which includes both met and non-met coal. Currently, the price of met coal is around $160 per ton. 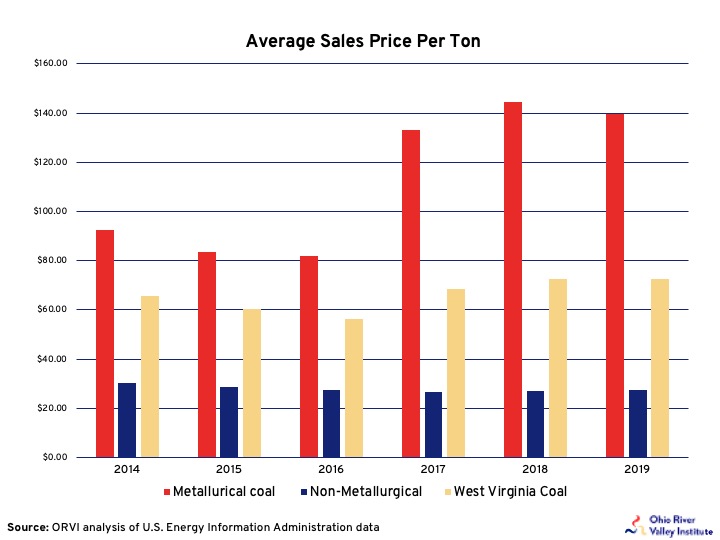 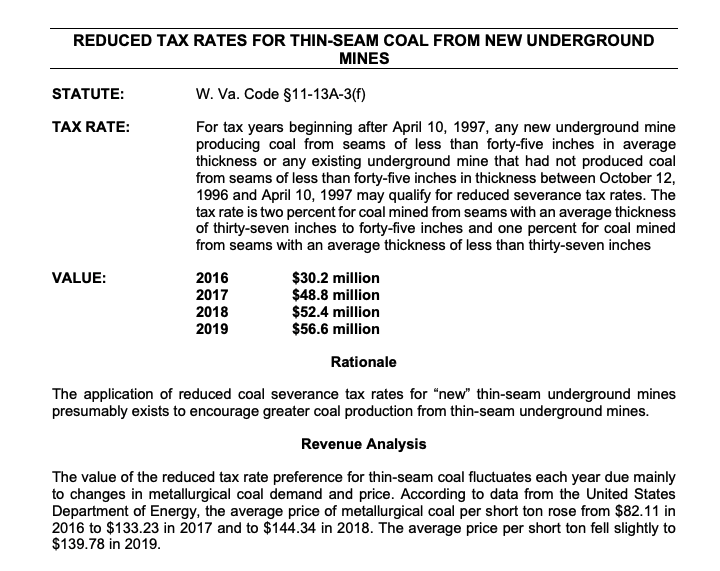 Back in 2006, the state recommended a review of the reduced rate on thin-seam coal production to see if there was a production cost difference “between a conventional coal mine taxed at 5 percent and thin-seam mines taxed at 2 percent or 1 percent under the regular severance tax, to determine whether the tax preference accurately accounts for such differences.” In 2017 and 2020, West Virginia Governor Jim Justice proposed creating tiered severance tax rates for metallurgical and steam coal based on coal prices per ton. The proposal included severance tax rates ranging from 3.5 percent to 10 percent based on the price of met coal per ton. 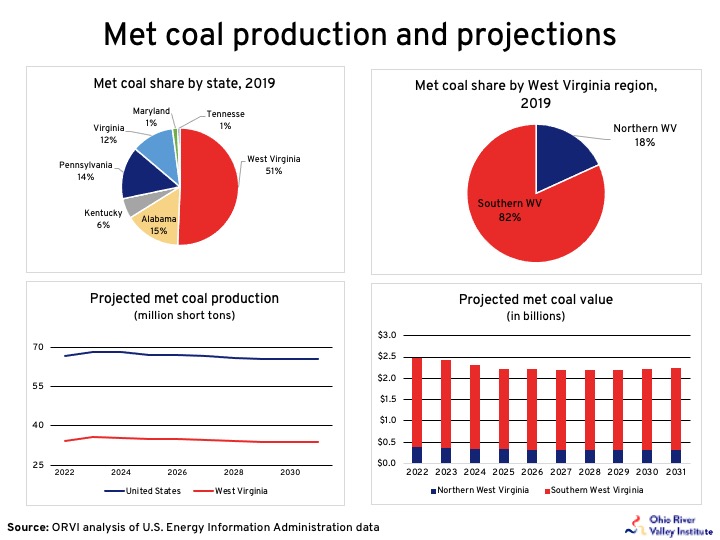 While thermal (steam) coal production will continue to decline in the United States as corporations, utilities, and governments move to cleaner electricity production, met coal will likely continue to be produced until steel producers find cost-effective alternatives.  Approximately 70 percent of global steel production relies on met coal, and the steel industry is the highest emitter of CO2 emissions among heavy industries at 10 percent of global energy sector CO2 emissions. Some steel companies are already moving to fossil-free steel by using renewable “green” hydrogen, but it will likely take at least another decade before it is cost competitive with met coal. Also, demand for met coal could increase if a large-scale federal infrastructure package is passed that requires American-made steel. In other words, now is the time to ensure that the coal industry pays its fair share and contributes to ensuring coal miners are not left in the dust.

Applying a 2.5 percent severance tax to the estimated value of met coal production would yield approximately $56 million per year, which is roughly equivalent to the value of the thin-seam subsidy in 2019. However, the amount of revenue would be highly volatile as past price fluctuations for met coal have shown. In addition, West Virginia lawmakers could adopt tiered rates for thin-seam coal production or eliminate the subsidy and apply a higher severance tax rate on met coal to reach a desired revenue target. 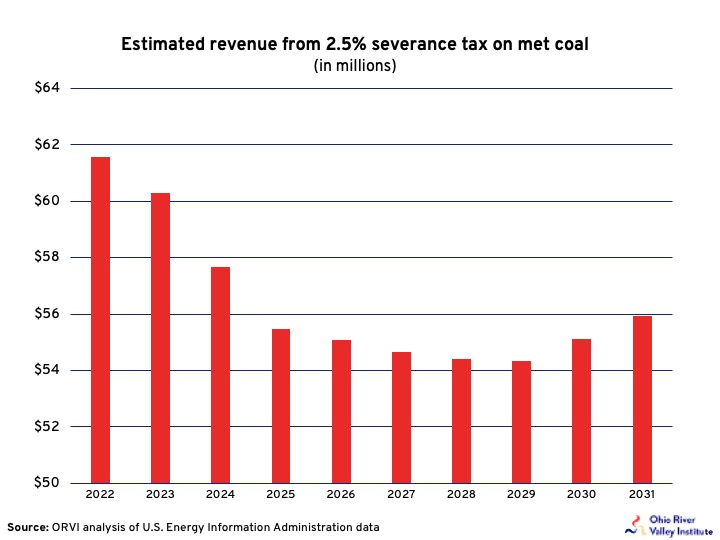 The revenue from removing the thin-seam severance tax subsidy could be deposited into a trust fund where the monies would be used to assist coal miners who have lost their jobs and benefits. Specifically, this could include pension and health benefits, guaranteed re-employment in jobs such as reclamation, income support through wage insurance (pays the difference between compensation in coal job and current job), retraining support (apprenticeship or community college), and relocation allowances. A recent analysis of providing these supports to fossil fuel workers in West Virginia estimates the cost at $126,000 per worker over three years, or $42,000 per year. With a projected revenue of around $56 million per year, eliminating the thin-seam subsidy could provide assistance to approximately 1,300 coal workers per year. Other ideas could include providing extended unemployment insurance similar to the pandemic unemployment assistance, or using the funds to directly employ former coal miners in public sector jobs or provide educational benefits to family members. Another model would be the Coal Workforce Transition Program in Alberta, Canada.

Coal mining employment in West Virginia has declined by over 12,500 since 2011 and has dropped by about 2,500 since the COVID-19 pandemic. As of the 3rd quarter of 2020, there were 11,324 people directly employed by the coal mining industry. A portion of these workers—perhaps 23 percent—are not hourly workers but are management, supervisors, engineers, foremen, office workers, and salespeople. These workers may not need assistance since they are not hourly paid coal miners.

It is unclear what the potential impact federal climate legislation or actions by other states could have on coal mining employment in the state. While coal miners at thermal coal mines will be more impacted by actions taken to reduce fossil fuel electricity, global economic conditions are more likely to impact demand for met coal in the state. 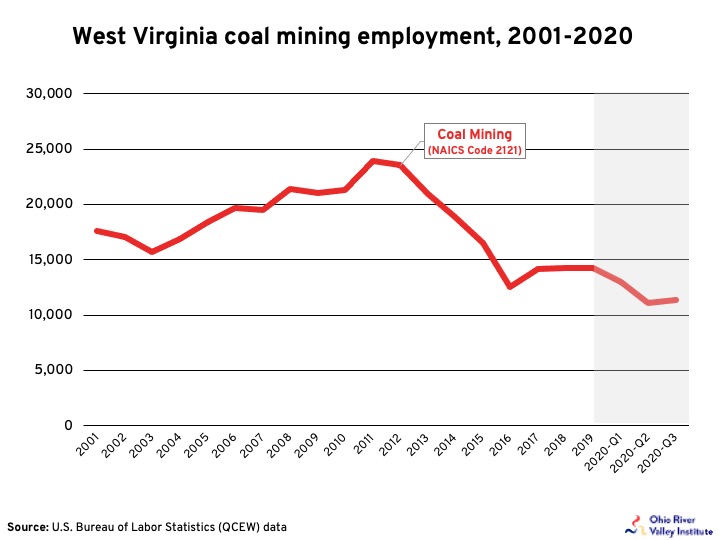