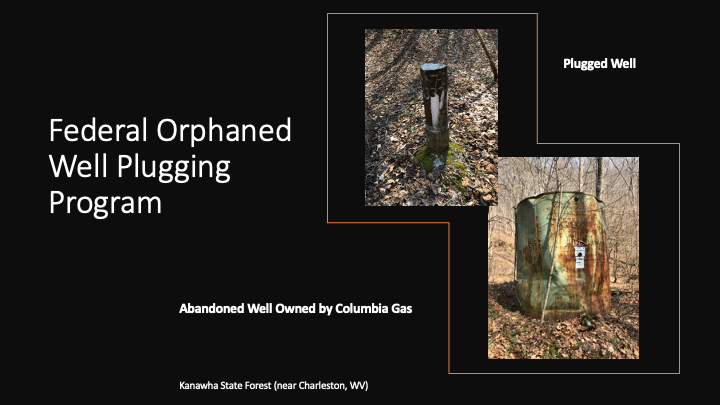 At the end of January, the Biden administration and the US Department of Interior (DOI) announced the first round of $1.15 billion in funding from a new federal orphaned well program to plug, remediate, and reclaim oil and gas wells. As part of the 2021 Infrastructure Investment and Jobs Act (IIJA), the Orphaned Well Program contains $4.7 billion over the next nine years for states, tribes, and the US Bureau of Land Management (BLM) to clean up a small portion of the damage left behind by the oil and gas industry. The legislation offers an important opportunity to not only clean up thousands of oil and gas wells and well sites, but to create good-paying jobs in rural and economically distressed places.

According to the DOI, there are over 130,000 documented unplugged orphaned wells in the United States, and perhaps an additional 800,000 undocumented orphaned wells. Unplugged and improperly decommissioned oil and gas wells can cause extensive environmental damage and impose health and safety risks because they often leak pollutants into the air and water. Some wells are also leaking large amounts of methane, a potent greenhouse gas that contributes to climate change. Leaks from abandoned and orphaned wells, such as oil, brine, and drilling byproducts, have also been linked to contamination of groundwater supplies and soil, which can undermine drinking water, impair agricultural activity, and lower property values.

This post is Part One of a two-part series on the newly established federal orphaned well program. It will explore the details of the legislation and what it means for the four states in the Ohio River Valley region of Appalachia. Altogether, it could bring over $1 billion in new resources to plug over 22,000 orphaned wells in Kentucky, Ohio, Pennsylvania, and West Virginia. Part Two in this series will include a list of recommendations to ensure that the program meets its goal of reducing methane emissions, remediating environmental damage, and restoring habitats where oil and gas wells have been drilled.

Of the $4.7 billion in funds for the program, about 91 percent goes to states, or, more precisely, their oil and gas regulatory programs. This includes $775 million in Initial Grants, $2 billion in Formula Grants, and $1.5 billion in Performance Grants. Approximately $250 million of the funds go to federal activities on land overseen by the US Bureau of Land Management (BLM), and $150 million goes to tribes to plug and restore well sites, while $30 million goes to the Secretary of Energy to conduct research and development related to mitigating environmental risks of undocumented orphaned wells. Meanwhile, $2 million flows to the Interstate Oil and Gas Compact Commission (IOGCC) to help carry out activities related to the legislation. 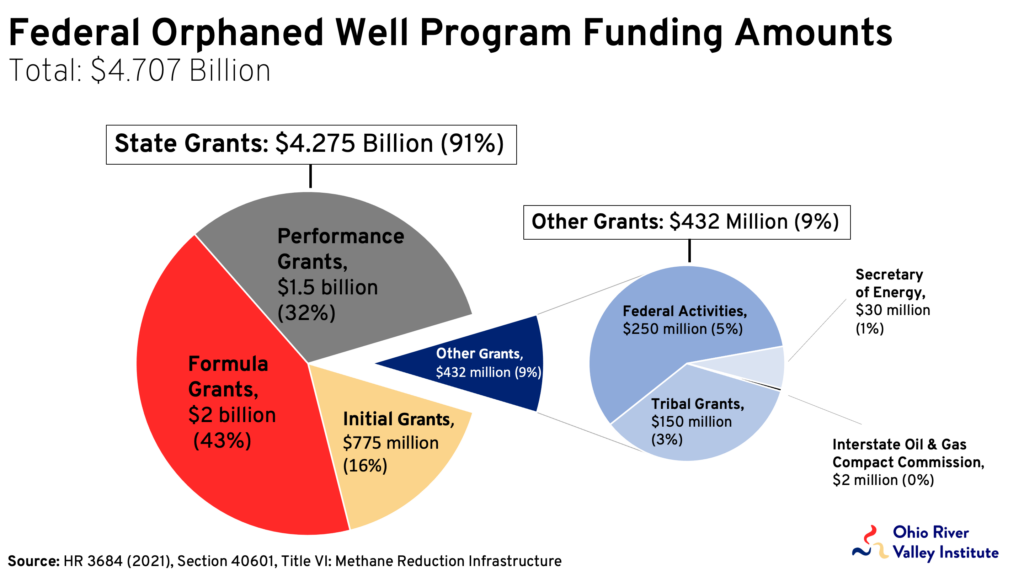 States’ grants can be used for a variety of activities on state-owned and privately-owned lands. These include plugging, remediating, and reclaiming orphaned wells and well sites; ranking orphaned wells based on relevant (risk) factors; measuring and tracking methane emissions and contamination associated with orphaned wells; and identifying and addressing risks to environmental justice communities. Administrative costs to carry out these activities cannot exceed 10 percent of grant funds.

According to the DOI, 26 states submitted “notice of intent” (NOI) letters for Formula Grant funding that included allocated funds for Initial Grants. Initial Grants are designed so states can quickly begin work and design a plan to grow their orphaned well plugging program. States can receive up to $25 million in Initial Grants if they certify that they are a member of the IOGCC, have at least one documented orphaned well, and will use the funds within 90 days of receiving them. Alternatively, states can receive up to $5 million if they have an orphaned well program or the capacity to initiate a program to develop an application for a formula or performance grant.

Each of the 26 states that submitted NOI letters qualified for $25 million in initial grant funding, but they must apply to DOI by May 13, 2022. States will have one year to obligate the funds and they must submit a report to DOI within 15 months. Only $650 million of the $750 million allotted to Initial Grants has been allocated to states. There is also a good chance some of the states that will receive Initial Grants won’t use all their funds. For example, Alabama received $25 million in Initial Grant funds but only had 89 documented orphaned wells in 2021.

States are required to submit a detailed application to the DOI for Formula Grant funding sometime this year. The application must include a description of the state’s orphaned well program, activities carried out with funds, and how the information will be made public. The application must also contain the number of orphaned wells, projected clean-up costs, costs offset by financial assurance instruments, the number of jobs created/saved, the amount that will be spent on administrative activities, and definitions and processes used to formally declare a well orphaned.

Performance Grants, which incentivize states to take fiscally and environmentally positive actions, fall into two categories: regulatory improvement grants and matching grants. States can receive up to two $20 million Performance Grants if they have strengthened laws or regulations around plugging standards and procedures or have taken steps to reduce orphan well burdens, such as alternative funding or financial assurance reform (e.g., bonding). States can also receive up to $30 million in matching funds for every dollar they spend in excess of average annual plugging expenditures from 2010-2019.

Applications for the Performance Grants include components similar to Formula Grant applications, but must also include a description of activities to find orphaned wells located in the state and how states will use funds to lower unemployment and improve economic conditions in economically distressed areas of the state. Applications for Performance Grants are due 180 days after the Initial Grant is provided to a state. Funds will be distributed 60 days after the state submits a complete application.

The four states in the Ohio River Valley region of Appalachia—Kentucky, Ohio, Pennsylvania, and West Virginia—have a long history of oil and gas extraction dating back to the mid-1800s. As such, these states also have a large share of old oil and gas wells, many of which are orphaned or abandoned and not properly closed. According to information submitted by Kentucky, Ohio, Pennsylvania, and West Virginia to the DOI, there are 64,607 documented orphaned wells in these four states. This number is up from 27,525 in 2018 and 49,620 in 2020. According to the  IOGCC, the states had 69,346 orphaned wells as of November 2021. Altogether, the four Ohio River Valley states make up around half of the country’s documented orphaned wells. 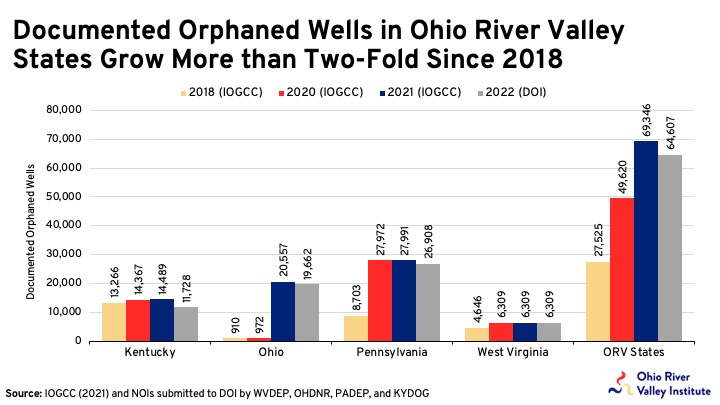 One potential reason for the large jump in reported documented orphaned wells is that states now have a new revenue source to plug these wells. To put this in perspective, states spent about $124 million plugging 4,000 orphaned wells in 2020. Over the next nine years, states could receive $472 million per year on average, more than 3.5 times what they spend today. The four states in the Ohio River Valley basin plugged just 467 orphaned wells in 2020, spending just $17 million.

The four states in the Ohio River Valley region it will cost $4.6 billion to plug and abandon (P&A) their 64,607 documented orphaned wells, or about $71,300 per well, on average. In general, P&A consists of plugging a well to state-set specifications (usually with cement plugs), restoring the wellsite through remediation of harmful materials, and reclaiming the property to its natural state (e.g., removing tanks). Because state orphaned well programs only plug a few thousand wells per year, it’s difficult to find an accurate estimate for how much it costs to P&A a well, especially in Ohio River Valley states.

So far, the four states have been allocated about $290 million, or 25 percent, of allocated funds. This includes $100 million in Initial Grants and $190 million in Phase One Formula Grants. Over the next nine years, the four states should receive an estimated $759 million in total Formula Grants. While it is unclear how much Performance Grant funding Ohio River Valley states will receive, it could be an additional $280 million. Pennsylvania predicts that it will be eligible for the full $70 million in Performance Grants. 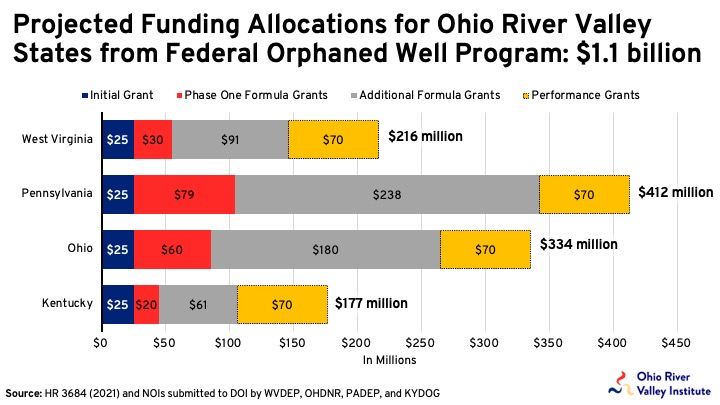 The four Ohio River Valley states could receive additional funds if other states are unable to use their allotted funds. Some of the 26 states that received Phase One Formula Grants may not receive a similar portion in the next three phases of formula funding since they have few orphaned wells.  Also, it is highly likely that there will be unspent performance-based grants that could be reallocated over the next decade. In future years, the formula for the Formula Grants could also change, and, along with it, the allocations.

The $1.139 billion in projected funds that the four states could receive over the next decade would allow these states to P&A an estimated 20,494 wells. This represents about 32 percent of the 64,607 documented orphaned wells in these states. While Kentucky may be able to P&A three-quarters of its orphaned well inventory due to its low P&A costs, West Virginia, Pennsylvania, and Ohio will only be able to P&A about 22 percent of their orphaned well inventory. 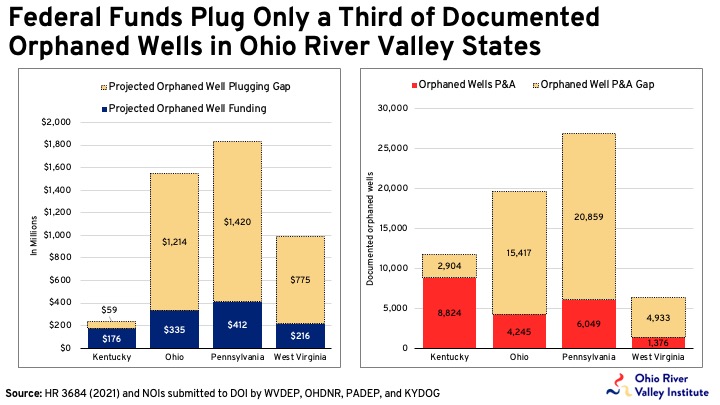 The new federal orphaned well program represents a significant investment in cleaning up thousands of leaking and hazardous oil and natural gas wells that dot the US landscape. It will help put thousands of people to work in largely rural and often economically distressed areas. The funds will not be enough to solve the abandoned well crisis in the United States or in the Ohio River Valley region. The long-term fix is going to require massive regulatory reform at the state level and likely a larger federal program designed to ensure that the oil and gas industry pays to clean up its mess.

Part Two of this series will explore recommendations to help ensure that these funds are spent with accountability and transparency, and that the program is successful in meeting its goals of reducing methane emissions, creating good-paying jobs, and preventing future orphaned wells.