Finding Opportunity in the Ohio Valley 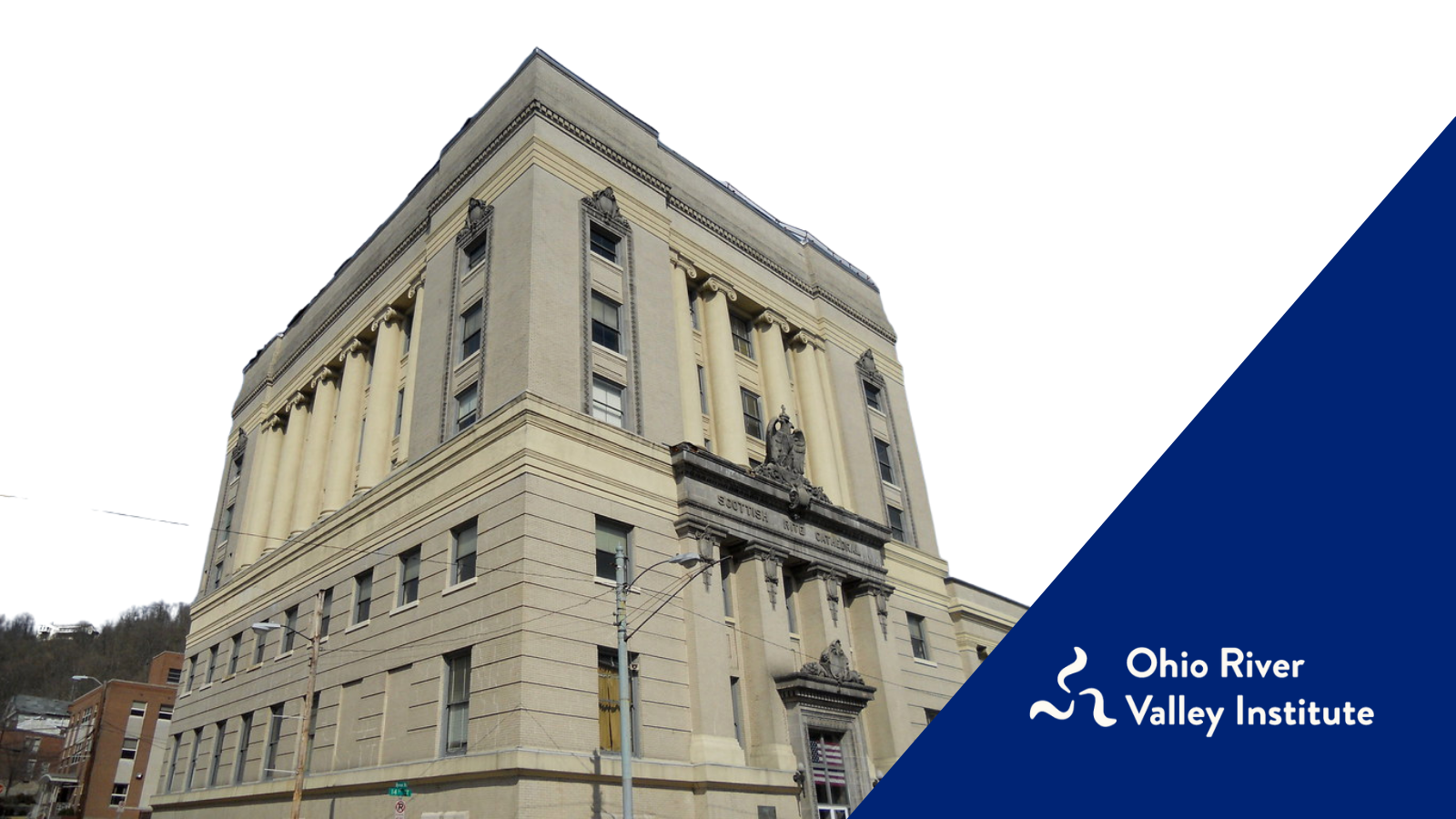 Roxby Development plans to transform Wheeling's Scottish Rite Building, a symbol of the city's old wealth, into a hospitality school.
by Ben Hunkler

Last week, Senior Researcher Sean O’Leary and I traveled across the Ohio Valley to discuss Ohio River Valley Institute research with county commissioners and local organizations. The trip laid bare the aftermath of fracking’s grip on the regional economy. Boarded windows and vacant, slouching storefronts line Bellaire, Ohio’s Belmont Street, looming over what was once the town’s bustling central artery. Empty lots overgrown with weeds encroach the few businesses that remain. Just a few miles away in the hills of Wheeling, West Virginia, trees sprout through the rotting floorboards of long-abandoned homes, evidencing nature’s slow reclamation of a city that was once home to nearly 60,000 residents.

Today, more than ten years after the fracking boom, less than 27,000 remain.

It’s obvious to folks in the Valley that more than $200 billion in natural gas investments and a decade of full-steam-ahead drilling haven’t created the hundreds of thousands of jobs promised to West Virginia, Ohio, and Pennsylvania. Despite the industry’s continued claims to the contrary, residents know that natural gas development hasn’t made the area rich or catalyzed an employment boom, and many doubt that more drilling or the construction of petrochemical projects reliant on gas feedstock will do much to improve the situation. That’s in part because economic stagnation and population loss have occurred in near lockstep with huge increases in natural gas production—from 2008 to 2019, Appalachia’s major gas-producing counties saw their share of the nation’s jobs, personal income, and population decline.

The bruised and battered downtowns of Appalachia wear the scars of this economic distress. Walking down the streets of Wheeling, it’s undeniable. But where some see gutted buildings and buckling streets, others see opportunity and potential.

Wheeling City Councillor Rosemary Ketchum counts herself among a growing cohort of young Appalachians who view the region for what it could be, not what it once was. There’s a new generation of proud, determined Valley residents, Ketchum explains, who are envisioning a stronger, more diversified economy rising from the bones of yesteryear. Some of them were born here and returned later in life. Others have transplanted from as far away as Southern California. But regardless of their origin stories, across Appalachia, these movers and shakers are recognizing the false promises of natural gas and petrochemicals and rolling up their sleeves to make a difference.

Just 50 miles away, Greene County, Pennsylvania Commissioner Mike Belding is hard at work forging a new direction for economic development in his county. He’s shaping large investments in broadband internet and outdoor recreation, including an activity complex with three softball fields, miles of hiking and kayaking trails, and an archery range, to encourage tourism and provide quality-of-life amenities for hometown residents.

Recent Ohio River Valley Institute research indicates that these approaches to development have the potential to create robust and lasting growth at a scale unachievable by natural gas drilling and exploration. The Centralia Model for Economic Transition in Distressed Communities demonstrates how a long-distressed coal town in Washington State steered its economy into overdrive, boasting job growth and GDP growth twice the national average just years after losing its two largest employers.

How? By investing in the same energy efficiency measures and quality-of-life upgrades underway in Wheeling and Greene County. In 2015, the town of Centralia and surrounding Lewis County secured and implemented a $55 million transition fund directed toward energy efficiency upgrades, clean energy investments, and education and retraining. These sectors are highly labor-intensive, creating 2-3 times as many jobs per dollar invested as natural gas drilling. And unlike natural gas, many of the jobs are performed by local contractors and suppliers—HVAC technicians; door and window, lighting, and insulation installers—so the funding goes to Centralia workers and stays in the Centralia economy.

Energy efficiency projects are always “shovel-ready,” and they have the added benefit of lowering utility bills and creating safer, more comfortable homes and offices that minimize healthcare costs and make the area a nicer, safer place to live and work.

Groups and individuals like Grow Ohio Valley and Mike Belding have realized that the future of the Ohio Valley is in these alternative investments, not more profligate natural gas drilling. And the Centralia model provides a recipe for sustainable economic growth that can be followed by communities facing similar circumstances in Appalachia. With unprecedented amounts of federal funding on the horizon, the path to economic prosperity is clearer than ever. It’s up to us to take the first steps.