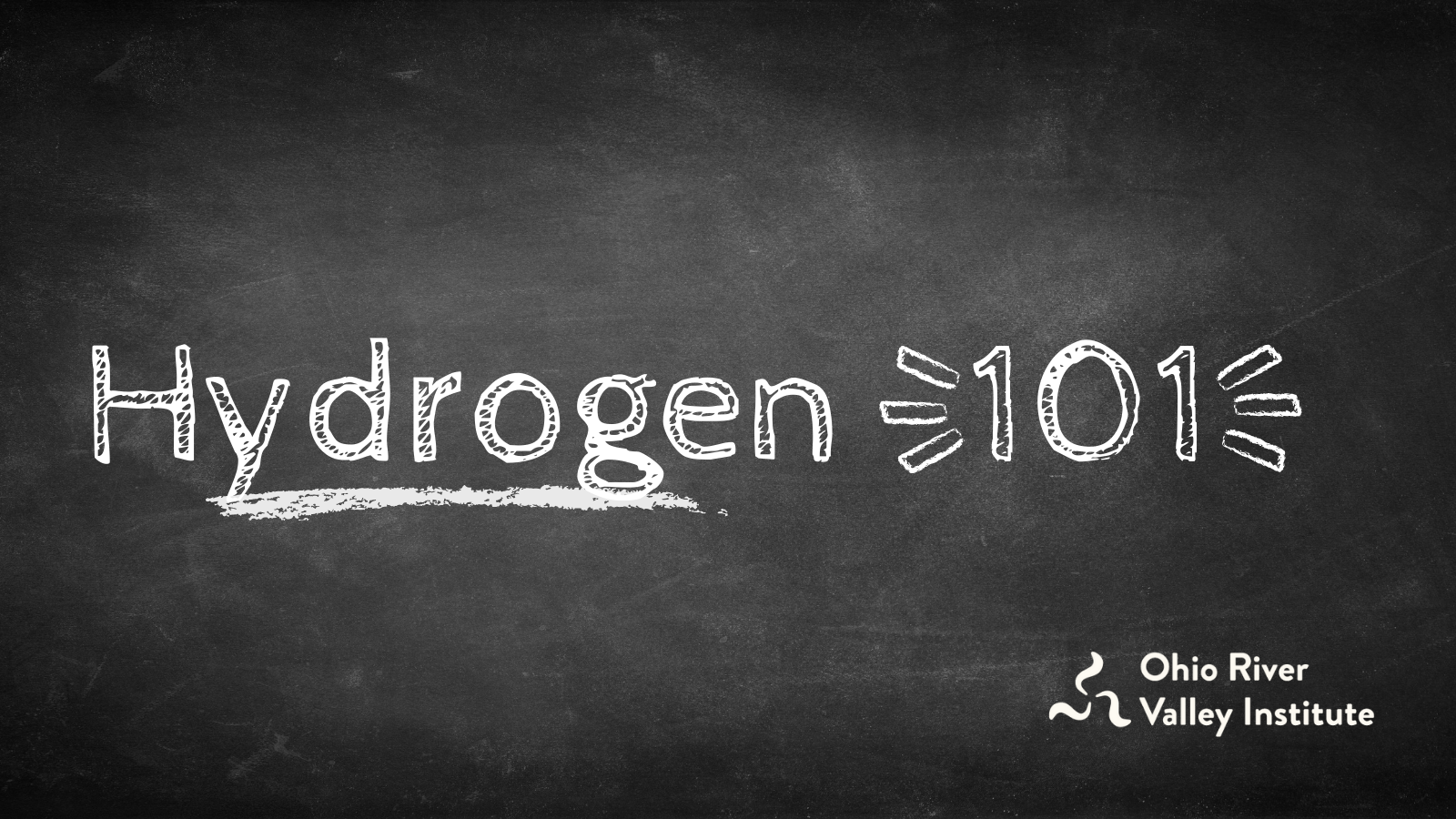 In the last few months, hydrogen has garnered serious hype across the Ohio Valley as the zero-emissions fuel of the future. But should proponents’ claims be taken at face value? Is more skepticism warranted? What is hydrogen, really, and what are its uses and challenges in an economy transitioning toward clean energy? The Ohio River Valley Institute has prepared this explainer and infographic to shed light on the roles that various forms of hydrogen development and carbon capture and sequestration (CCS) should play in Appalachia and beyond.

There are several ways to produce hydrogen, but most of them use methane, a natural gas. This process, called steam reforming, converts methane into hydrogen and carbon dioxide and is known as “gray hydrogen.” If the carbon dioxide released during production is captured and sequestered, it is called “blue hydrogen.”  Unfortunately, carbon capture and sequestration (CCS)—the defining feature of blue hydrogen—is expensive, unreliable, and not yet technically feasible at a large scale.

Hydrogen is only green if it is created using renewable energy though the process of electrolysis using water, rather than methane, as the feedstock. The future of green hydrogen inherently depends on increasing the production of low cost, reliable energy from sources like wind and solar. So if Pennsylvania aspires to be a center of green hydrogen, it should pursue rapid and widespread deployment of clean energy.

The gas industry is intent on pursuing blue–not green–hydrogen for the simple reason that the process relies on natural gas. There is no reason to believe that the current backers of the gas industry would want to pursue green hydrogen because it directly undercuts their interests. For example, participants in a recent forum sponsored by the Energy Futures Initiative made virtually no mention of green hydrogen.

Even if blue hydrogen producers somehow manage to safely trap the carbon that is emitted by steam reforming of methane gas, it would still require an extensive network of frack wells, compressor stations, pipelines, and other infrastructure that leaks methane and creates a welter of other problems.

What should hydrogen be used for?

There are a limited number of cases where green hydrogen could play an important role in a clean energy future. For example:

What should hydrogen not be used for?

At the same time, there are major challenges to hydrogen, even in its cleanest form:

Much like hydrogen, carbon capture and sequestration (CCS) has a specific, limited role to play in a clean energy future. For example, it could be used to reduce the carbon emissions from burning fossil fuels while the economy transitions to genuinely low-carbon energy production or for the small set of industrial activities that may not be possible to decarbonize.

CCS should not be used to prolong business as usual for the fossil fuel industry because there is simply not enough capacity to safely sequester all the carbon emitted by current activities nor is there a guarantee that trapped carbon would remain sequestered permanently. As Drawdown author John Foley points out, “Even the best technologies available today are stretching to absorb a few thousand tonnes of carbon dioxide. The problem is we currently emit about 50 billion tonnes of greenhouse gases every year… Even if removal technology can scale 1,000x to the million-tonne range, which is still years away, it would still need to grow by another 1,000-fold to even be a tiny percentage of the solution we need.” There is also a risk CCS will be used to justify ongoing operations of the coal, oil, and gas industries, which will result in continued air pollution, water pollution, health problems, and economic failures.

The current state of play for hydrogen and CCS

According to news reports, the bipartisan infrastructure package contains nearly $86 in new federal spending to support carbon dioxide transport and storage, plus $2.5 billion for research into the technological aspects of CCS. The bill also contains around $9 billion to support the development of blue and green hydrogen.

The newfound popularity of CCS has alarmed much of the environmental movement. In July 2021, more than 500 environmental groups from across North America signed a joint letter that harshly criticizes new plans. (The Center for International Environmental Law published a particularly trenchant critique.) Yet at the same time, a coalition of labor unions, infrastructure developers, and other environmental groups have urged Congress to spend money on carbon storage.

Much of the hype about hydrogen is misleading. Nearly all the hydrogen produced today is dirty, and clean hydrogen is not yet market-ready. Truly clean, green hydrogen has important niche applications in industries that are difficult or costly to electrify, but effective reduction of carbon emissions will result from expanded electrification and cleaning up power generation.