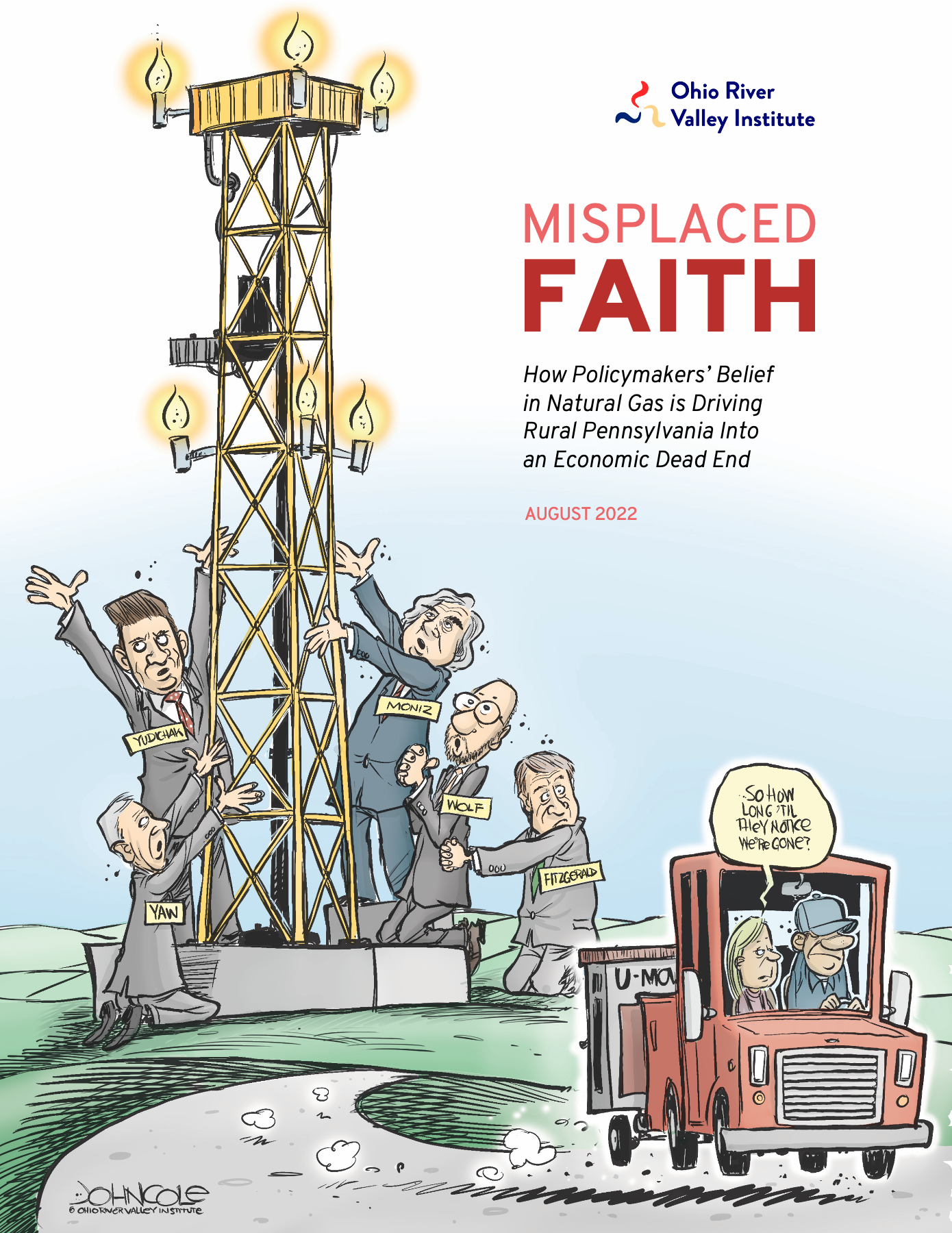 Pennsylvania policymakers of both parties are driving efforts to expand the state’s natural gas economy despite mounting evidence which shows that the decade-long production boom has failed to stem or even reduce job and population losses in rural counties where the gas industry is most prevalent. In a new report titled “Misplaced Faith: How Policymakers’ Belief in Natural Gas is Driving Rural Pennsylvania Into an Economic Dead End”, the Ohio River Valley Institute finds that Pennsylvania’s rural natural gas counties have experienced job losses every year since 2012 and are struggling with a rate of population loss that is among the worst in the United States.

The report also rebuts suggestions that economic conditions would have been even worse without the natural gas boom by showing that the rural Pennsylvania counties that have not been heavily impacted by the natural gas industry have done no worse in job or population performance and, in some cases, have done better than those counties whose economies relied heavily on natural gas. The poor economic trajectories of Pennsylvania’s rural natural gas counties raise red flags about policymaker support of continued oil and gas development and the construction of a proposed gas-reliant hydrogen and carbon capture hub.

Rural communities across the country have struggled in the last decade. A recent analysis by the Pew Charitable Foundation paints a stark picture of population decline in non-metropolitan counties, a key indicator of economic decay. While urban and suburban counties grew by 8% from 2010 to 2020, rural counties lost half a percent of their residents. In Pennsylvania, rural residents packed up and left in droves: the population of the state’s rural counties fell by 4.7%.

To determine the relative economic impacts of natural gas development in rural Pennsylvania, the Ohio River Valley Institute study compares the economic trajectories of two sets of non-metropolitan counties in which, prior to the gas boom, the trajectories of gross domestic product (GDP), jobs, and population were almost indistinguishable. Ten of the counties participated heavily in the Appalachian fracking boom, and twenty “control” counties were largely untouched by gas development.

Data show that from 2008 to 2020, Pennsylvania’s “natural gas” counties saw a boom in economic output as measured by gross domestic product (GDP), tallying a 50% increase in GDP as compared to 2001 levels, a rate more than double the growth of the state’s and four times that of the “control” counties.

Yet, from 2001 to 2020, the “natural gas” counties lost over 6% of their residents, a rate of population loss greater than that of the “control” counties and nearly as bad as rural population loss in the most afflicted states nationally.

Employment hardly fared better. During the same period, the “natural gas” counties experienced a net job loss of 3.3%, only slightly better than the “control” counties, in which 4.2% of jobs were lost. The report also found that, even though the natural gas boom produced major GDP growth in the counties where it was concentrated that growth had only a small ripple effect, as the remainder of the economy in natural gas counties experienced little incremental growth.

“After more than a decade of immense investment, natural gas development has shown itself to be an ineffective vehicle for economic development at best and at worst it may be destructive to job creation and population growth in the region,” said author Sean O’Leary, a Senior Researcher with the Ohio River Valley Institute. “The data are quite clear that natural gas expansion is not a foundation upon which job growth and economic development can be built.”

“Not only has gas development failed to deliver on promises of far-reaching economic benefits, it has not even buffered against regional economic struggles,” added Ohio River Valley Institute Executive Director Joanne Kilgour. “Data suggest that Pennsylvania’s natural gas counties may have been better off had the fracking boom never happened.”