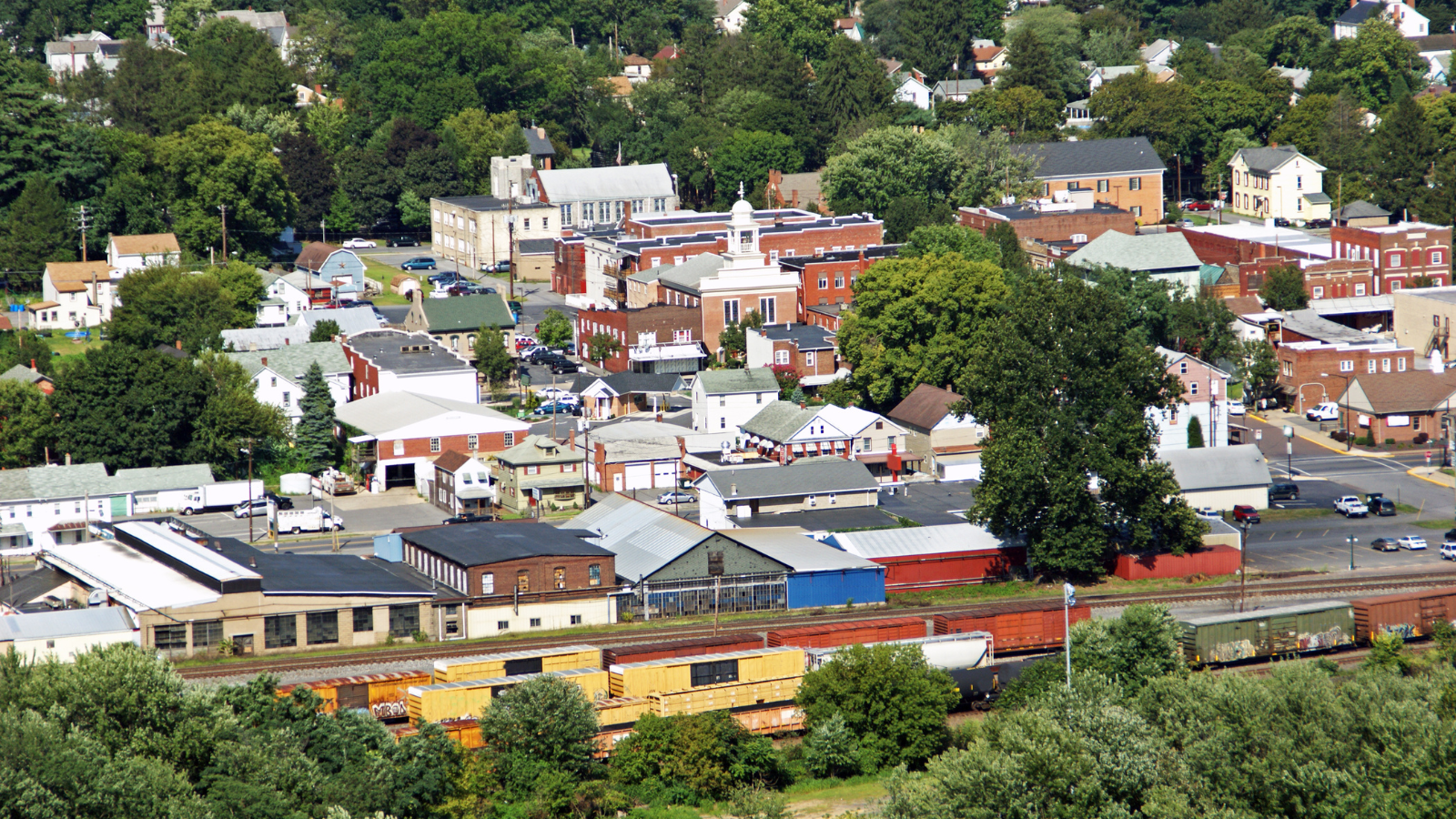 Last year, ReImagine Appalachia published an overview of Appalachian Regional Commission (ARC) funding since 1965. We highlighted that non-highway funding for ARC has declined about $650 million annually since the late 1970s and early 1980s—when parts of the ARC region, including PA-OH-WV and KY, lost big parts of their traditional economic base in extractive industries and in manufacturing. In retrospect, we suggested Congress made a mistake cutting ARC funding—given the evidence (surveyed in our brief) that ARC investments create jobs and narrowed the gap in economic outcomes between ARC counties and the rest of the United States. We highlighted that Congress had a chance to rectify its mistake by delivering Appalachia its due share in new federal infrastructure and climate jobs funding. We also pointed to the bipartisan RE-POWER Act sponsored by Representatives Conor Lamb (D-PA) and David McKinley (R- WV), which provides $1 billion in POWER grants for communities and regions impacted by job losses in the coal industry to invest in economic and workforce development in the ARC region, including the four ReImagine Appalachia states.

While the RE-POWER Act has not advanced in the legislative processes of the US Congress yet, there’s another piece of legislation with resources for coal impacted communities in Appalachia—the RECOMPETE Act—that has made progress, within two different bills. A “pilot” $4 billion version of the RECOMPETE Act was also included in the reconciliation package, the Build Back Better Act, which passed the U.S. House on November 19, 2021. The same pilot version of RECOMPETE was also included as Section 110001 of a large innovation and manufacturing bill, the U.S. Innovation and Competition Act, which passed the U.S. House on February 4, 2022. 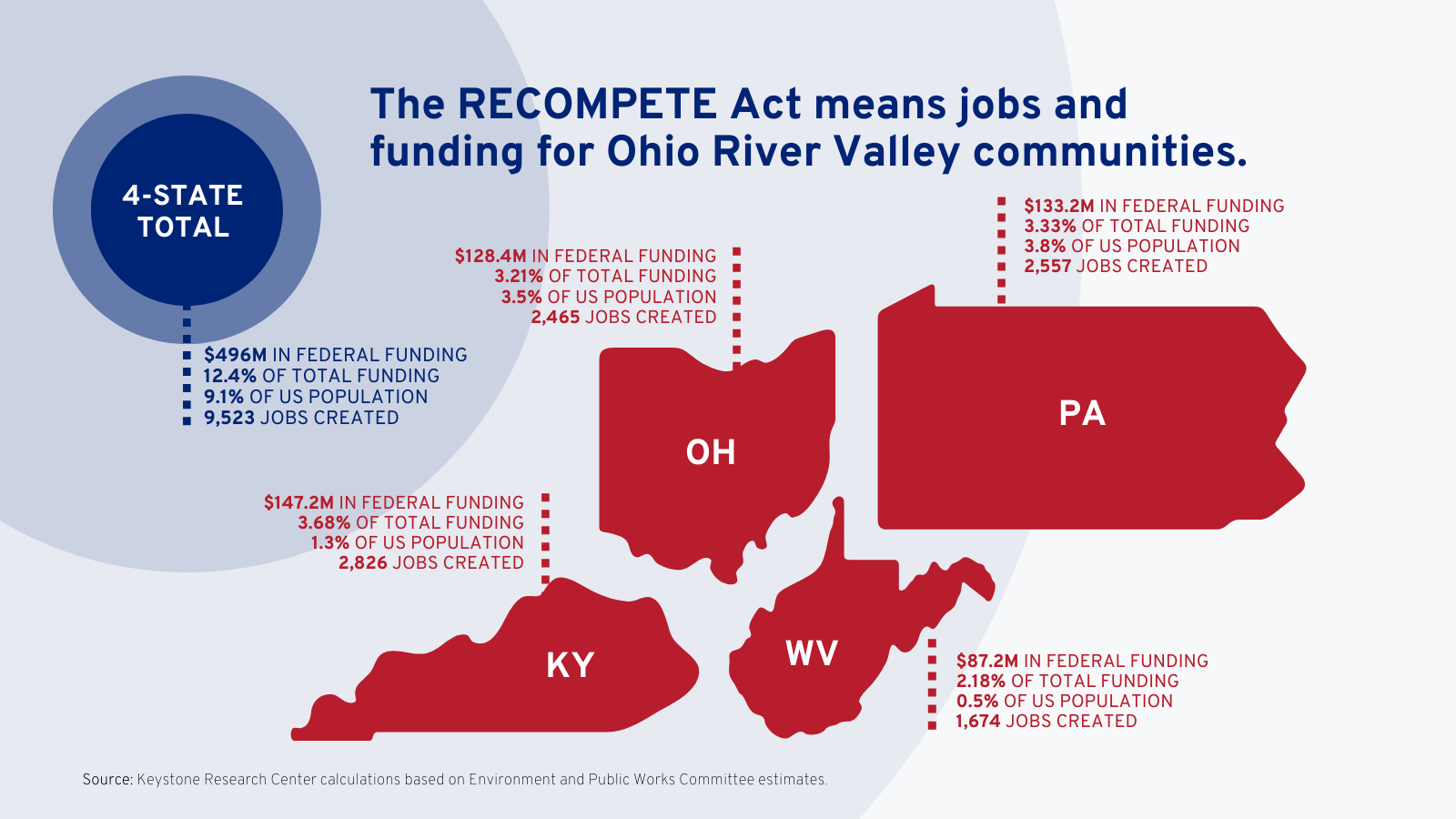 Under the stand-alone fully funded RECOMPETE Act (HR 4651; summarized here) the local match required in each labor market declines the bigger the gap between the national and the local employment rate. The most distressed places, with a prime age employment rate 10 percent or more below the national level, require no local match. Places only somewhat distressed, with a prime-age employment gap of 3 percent to 4 percent, require a match of 44 percent.

The focus on prime-age employment rates is based on research by the Upjohn Institute’s Tim Bartik on placed-based economic development and persistently distressed communities. The prime-age employment rate is a key proxy for economic health. Investment in business assistance and economic development that raise the employment rate can stimulate revitalization. Based on Dr. Bartik’s estimates in a recent Brookings Institution report, the full RECOMPETE Act could generate about $40 billion per year in revenue once fully in effect and increase the national employment rate by 1.1%. If you assume that this would increase GDP and tax revenue by the same 1.1%, the bill will pay for itself.

With the Congressional clock ticking, there are still two ways the RECOMPETE Act could get to the finish line. The House COMPETES Act is now part of a House and Senate “conference committee” process, within which bipartisan representatives seek to reconcile the differences between the House and Senate version of the United States Innovation and Competition Act (USICA). (The Senate version of USICA, which passed 68-32 on May 12, 2021, did not contain the RECOMPETE Act in any form.) Second, RECOMPETE could advance if it is included in the slimmed-down Build Back Better, or reconciliation, bill, now reported to be subject of more serious negotiations.

The pilot version of RECOMPETE would not have enough resources to formula fund all qualified communities with low prime-age employment rates, so it would provide competitive grants. Priority would still go to the most distressed places with the lowest employment rates. For that reason, West Virginia could receive a disproportionally large share of the $4 billion because of its low employment rates.

Bartik estimates that grants from the RECOMPETE Act would create (on average) one job per $50,000 invested. Based on this estimate, the $496 million invested in the four-state region from the pilot RECOMPETE Act could create an estimated 9,500 jobs. The estimated half billion invested in the four-state region from the RECOMPETE pilot would likely be close to the share of funds these states would receive from the $1 billion in proposed POWER grants, with both achieving similar goals.

One of the key players in determining whether the pilot RECOMPETE bill gets into the bipartisan COMPETES Act is West Virginia’s Senator Shelley Moore Capito (R-WV),  the ranking minority member of the Environment and Public Works Committee, which handles economic development portions of the conference process.

Another key member is Senator Roger Wicker (R-MS), who also represents an Appalachian state—Mississippi. He is the ranking member of the Senate Commerce Science and Transportation Committee, the primary Senate committee negotiating the final Bipartisan Innovation Act conference process.