It’s hard to conceive of a worse scenario for the nascent Appalachian petrochemical industry than a world in which the price of oil is chronically low, competition from more efficient producers of ethylene is increasing, and growth in demand is expected to slow. But, that’s precisely the scenario that appears to be developing thanks largely to recent initiatives undertaken by an old energy adversary, Saudi Arabia.

Historically, American attitudes toward Saudi Arabia have been by turns racist, jingoistic, and even misogynistic (“They know how to use their asset.”). Never more so than in the 1970s, in the wake of “the Arab Oil Embargo”, when the Organization of Petroleum Exporting Countries (OPEC) asserted oil dominance by starving the west of supplies and forced Americans to line up for gasoline that might be gone by the time you got to the pump.

Since then, expanded oil production in North America, primarily as a result of fracking, has greatly weakened OPEC’s hold on oil markets as have OPEC countries’ need for income. But, OPEC nations still provide about 40% of the world’s oil and enjoy the lowest marginal production cost – about $3/barrel in Saudi Arabia – which means that they can, if provoked, still assert great influence.

Now, Saudi Arabia has been provoked and is embarking on three major initiatives that, together, are likely to accelerate the wave of post-COVID bankruptcies in the North American fracking industry and possibly cripple if not eliminate prospects for an Appalachian petrochemical buildout.

Earlier this year and again, just last week, the Saudi’s demonstrated a willingness to ramp up oil production in order to drive down oil prices and protect market share that might otherwise be lost to North American frackers. By driving down prices, the Saudis also drive down the price of naphtha, the oil derivative that competes with Appalachian ethane as a feedstock for petrochemicals. The resulting reduction in demand for ethane dilutes the economic rationale for the construction of ethane crackers in Appalachia of which only one – The Royal Dutch Shell project in Beaver County, Pennsylvania – has gotten off the drawing board.

Another factor contributing to the possibility that the first Appalachian cracker may be the last is Saudi Arabia’s development of “crude oil-to-chemicals” (COTC) technology that is capable of producing ethylene – the raw material for plastics – at a fraction of the cost of ethane crackers.

COTC technology enables oil refineries to extract chemicals, including those used to manufacture plastics, as part of the refining process and also to adjust the composition of output in response to changes in market demand. In 2019, Chemical Week reported that COTC would double refineries’ profit margin. 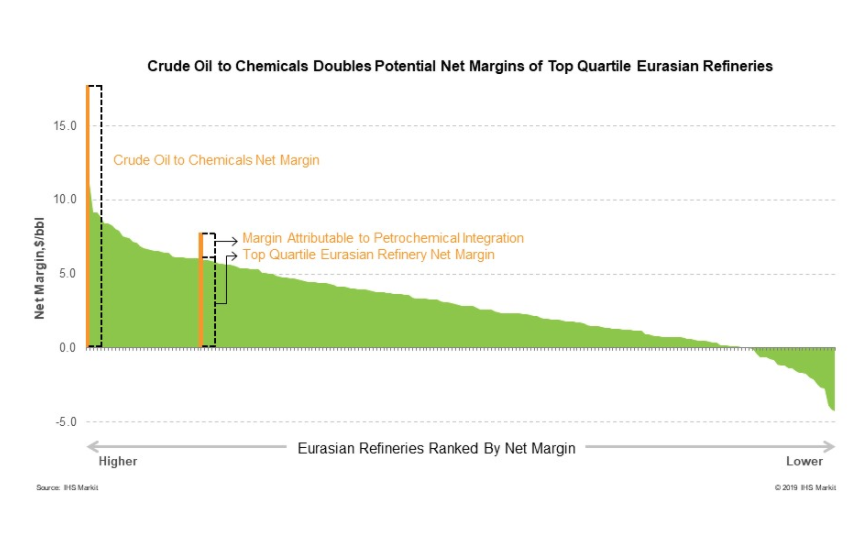 And a recently completed analysis by Wood Mackenzie of the Hengli COTC plant in China produced an equally stunning result with respect to the manufacture of ethylene. Even with oil at what is by present standards a relatively high price of $54/barrel, the Hengli plant, which started up in 2019, generated a significantly higher ROI than US ethane crackers. Now, with the price of oil at between $40 and $45, which based on recent actions seems to be the level the Saudis find acceptable, the advantage will be even greater. 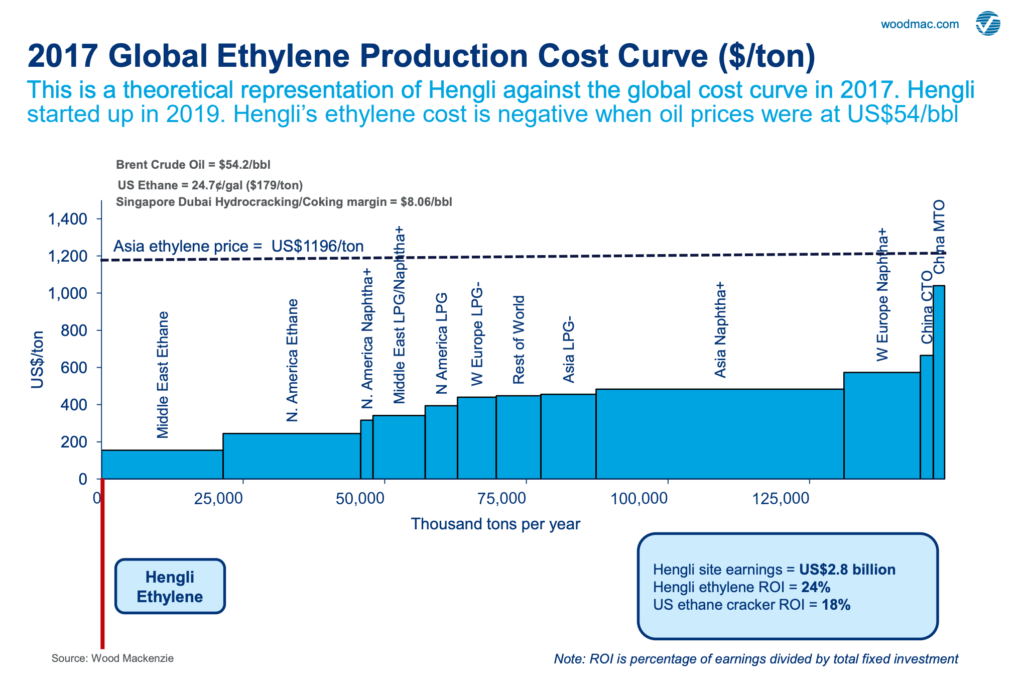 That’s part of the reason why the Saudi companies Aramco and Sabic are now building a COTC refinery, which will be able to produce more than twice as much ethylene as Shell’s Pennsylvania cracker. Meanwhile, Chinese companies are building another four. And additional technology enhancements in the works at Aramco are expected to double yet again the margins earned by these plants.

While the Saudis are finding ways to manage the price of oil and increase its value, they’re not neglecting natural gas. The government recently approved development of the Jafurah natural gas field, which contains 200 trillion cubic feet of natural gas, a sum almost as great as the 214 trillion cubic feet contained in North America’s Marcellus field.

Jafurah will make Saudi Arabia a bigger player in the plastics feedstock market and is expected to provide natural gas to fuel that nation’s power needs, thus freeing up more oil to be sold on world markets.

Since the announcement of the Shell cracker more than four years ago, investors have chosen not to fund another major petrochemical project in Appalachia. These may be reasons that their unwillingness to do so continues.