While West Virginians are dealing with the COVID-19 pandemic and trying to figure out if their kids can attend school, the oil and gas industry is working with the West Virginia State Tax Department to cut its property taxes by as much as $62 million per year. Last month, the state tax department released a draft rule change on how oil and gas personal property is appraised and taxed. The proposed rule mirrors the wishes of the oil and gas industry and, if implemented, would force either cuts in local government services (e.g. public safety and schools) or shift more of the tax responsibilities onto residents and other businesses.

The draft rule would scrap the caps and remove all limits on the post-production expenses gas producers can deduct from their property tax liability. This would drastically lower the tax revenue collected by counties. The proposed rule change is very similar to the industry backed Senate Bill 655, which overcame bipartisan opposition to pass the West Virginia Senate in 2020 only to be rejected by the House.

According to the WV Property Tax Department, the proposed changes could lower local oil and gas property tax collections “by approximately 50%”. In Tax Year 2019, West Virginia’s local governments collected an estimated $123 million in oil and gas property taxes. suggesting that local government would lose an estimated $62 million. The counties where  horizontal fracking wells produce gas and oil will be the most heavily impacted, taking a hit of $54 million. 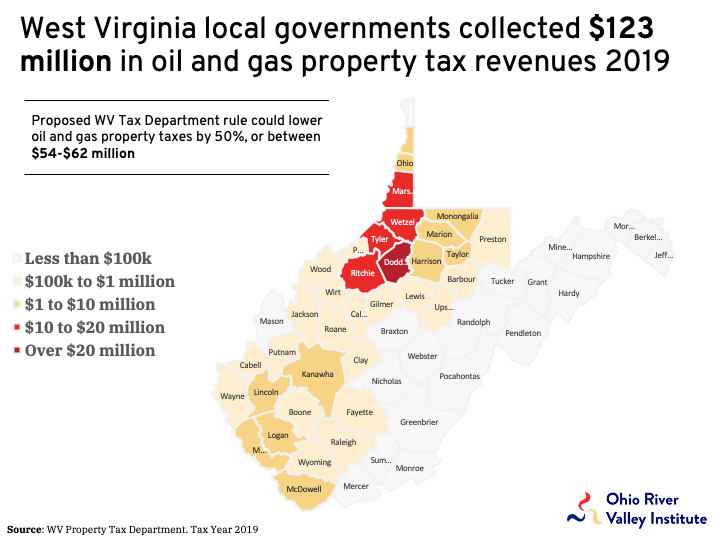 In addition to impacting county budgets and services, the state would incur added costs under the State School Aid formula. The West Virginia Center on Budget and Policy estimates an additional expense of $13 million, which would have to come from the  general revenue fund budget.

The proposed rule change will have to be approved by the West Virginia legislature next year. Policymakers should not agree to this or any change that reduces oil and gas taxes. Doing so would take money from gas producing counties that already receive too little benefit from extraction. And it would result in either cuts to state and county services or shift the tax load on to state residents and local businesses.