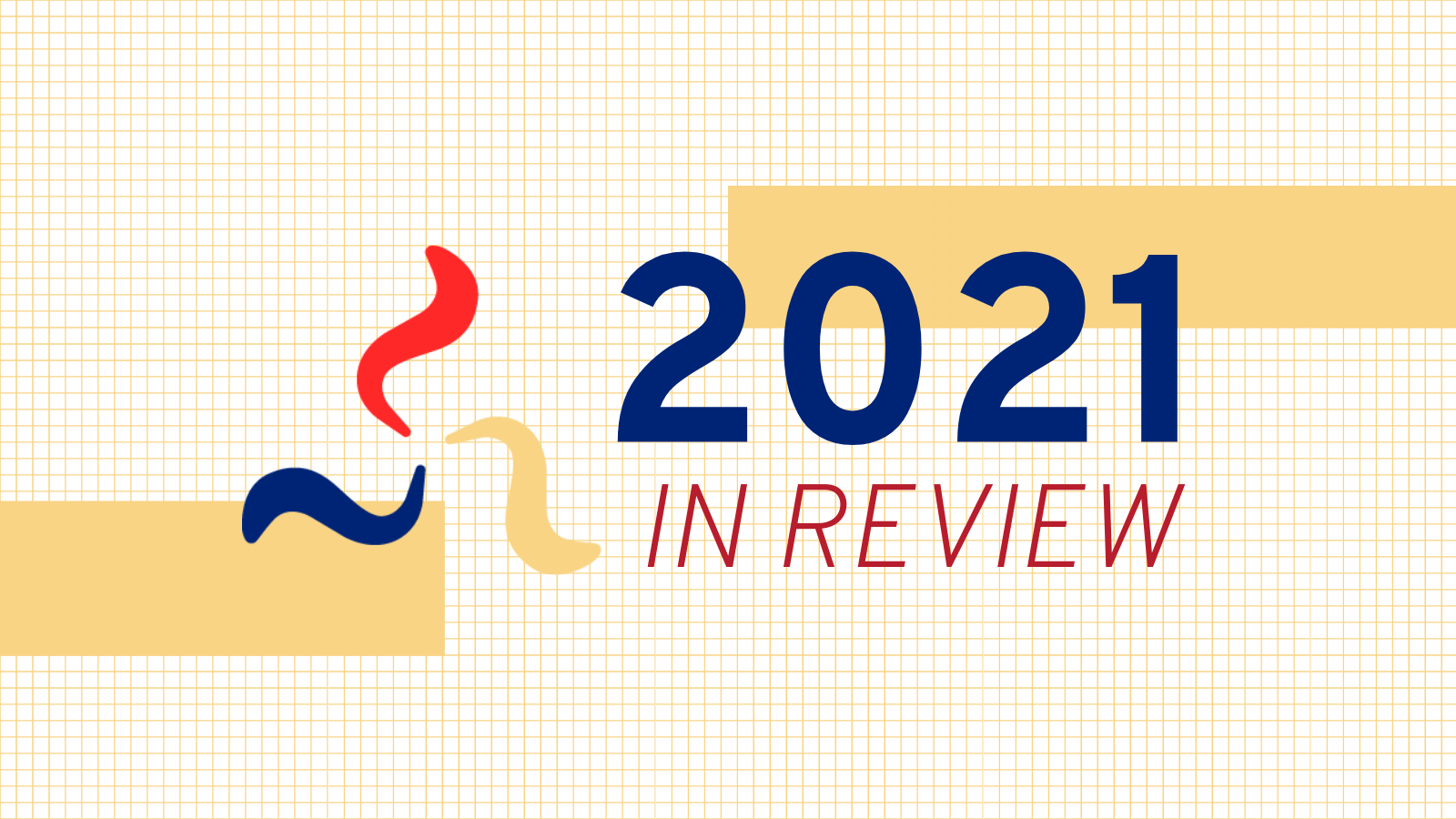 As 2021 draws to a close, the Ohio River Valley Institute is looking back with gratitude and excitement on our first full year of operation. We’ve made some notable strides in the past twelve months toward addressing Appalachia’s most significant challenges, tracking the economic ‘bust’ of the Appalachian fracking and petrochemical booms and identifying programs and alternative pathways for investment that can generate lasting, shared prosperity in the region.

We believe the Ohio River Valley is a place where communities can grow and thrive by investing in, rather than exploiting, local resources. Our research in 2021 reflected our organizational principles of sustainability, democracy, and shared prosperity, helping equip the region’s residents and policymakers with the data and research they need to cultivate a stronger, more equitable Appalachian economy.

Our very first report, released in February 2021, quantified a pair of decade-long economic trends that took many in the region by surprise. Between 2008 and 2019, the twenty-two highest-producing natural gas counties in Ohio, Pennsylvania, and West Virginia set a record pace for economic output growth, more than tripling the national average, Senior Researcher Sean O’Leary explained in Appalachia’s Natural Gas Counties: Contributing More to the US Economy and Getting Less in Return. Yet, in the same period, these counties saw declines in their share of jobs, income, and population. Data from the report challenged prevailing claims by the industry and many of the region’s policymakers that fracking has been the region’s economic engine and lifeblood, sparking months of regional and national media conversations and an ongoing debate about the role of the natural gas industry in Appalachia.

Subsequent ORVI research explained that the fracking boom’s failure to produce local economic prosperity can be attributed to several structural and unalterable characteristics of the natural gas industry. Relative to other industries, natural gas is highly capital-intensive and doesn’t create many jobs per dollar invested. Many of the jobs the industry did create went to workers hailing from outside the region who took their paychecks home once their work was finished. Lastly, low natural gas prices caused royalties and other revenues earned by property owners to fall far below expectations. Collectively, these issues can’t be fixed with more drilling or development, pointing to a need for economic development strategies that succeed in the areas where natural gas-based development failed.

A review of economic data indicates the petrochemical industry has also fallen far short of expectations. Trumpeted by elected officials and industry boosters as an economic game-changer, the petrochemical buildout in Beaver County, Pennsylvania has instead failed to produce measurable growth since the announcement of the Shell ethane cracker in 2012. The county’s economic track record shows zero growth in employment, zero reduction in poverty, zero growth in businesses, a declining population, and GDP growth much slower than the national and state average, even when factoring in all the contemporary construction workers at the Shell site. It’s a clear indictment of the economic potential of large-scale petrochemical development, according to Senior Researcher Eric de Place and Research Fellow Molly Kiick, and one that should give pause to planners evaluating the merits of betting on petrochemicals to produce economic growth.

In addition to poor retrospective performance, the long-term fiscal outlook for gas and petrochemicals isn’t better. A March analysis of 200 prospective gas projects in Pennsylvania, Ohio, and West Virginia found that the industry is vulnerable to sustained, low prices of domestic gas and natural gas liquids. The financial outlook for Appalachian petrochemical development is on similarly shaky ground: rising feedstock costs, falling ethylene and polyethylene demand, and a shrinking international market are likely to impede new capacity additions in the region, according to a wide-lens analysis of the petrochemical industry released in November. As a whole, the industry suffers from many of the same structural flaws as the natural gas industry, including low labor intensity, disproportionate dependence on out-of-region service providers and markets, and environmental externalities that harm quality of life and actually discourage other forms of business investment.

Even new technologies, like exorbitantly expensive and technically unproven carbon capture, use, and sequestration (CCUS), won’t be enough to save the financial case for petrochemical growth. With a price tag of $100 billion per year if implemented in the nation’s remaining natural gas and coal-fired power plants, CCUS is generally a poor means of decarbonization, save for some niche industrial applications, Sean O’Leary explained in October. And serious guardrails on the development of hydrogen—over 95% of which produced today is ‘dirty’—are necessary to avoid prolonging fracking and extending the environmental harms and economic failures of the fossil fuel industry, according to Eric de Place.

Meanwhile, the region is seeing a precipitous erosion of public support for ongoing fracking operations. A groundbreaking opinion poll released in July showed that, by wide margins, Pennsylvania voters support a serious crackdown on fracking activity. Across demographics, voters in the Keystone State are deeply concerned about the impacts of drilling, and a majority want to end fracking altogether.

For more than a decade, the Ohio River Valley economy has been defined by hydraulic fracturing. Billions of dollars have been injected into the region to extract, process, and distribute natural gas. Our 2021 research shows that this model hasn’t worked for local communities and their economies—and it’s unlikely to improve in the future. But complementary research throughout this year shows that an alternative economic future, one designed to produce lasting, shared prosperity, is possible.

In June 2021, Senior Researcher Sean O’Leary discovered a curious economic trend in Centralia, Washington, an historic coal community that, like many towns in Appalachia, had been struggling with job and economic stagnation for years. Centralia’s strip mine, once one of the town’s largest employers, had shuttered, and its coal-fired power plant was in the process of shutting down, which will result in the loss of over 350 jobs when the shut-down is complete in 2025.

Yet, the town’s economy is booming—from 2016 to 2019, GDP growth and job growth were approximately double the national average, and wage and population growth exceeded the US, as well. O’Leary’s digging uncovered the astounding economic benefits of the Centralia Coal Transition Grants program, a $55 million fund strategically allocated toward clean energy, education, and energy efficiency that coincided with a dramatic economic turnaround in a micropolitan area once dependent on coal. Lessons from Centralia—that these sectors are unusually jobs-intensive, tend to be performed by local suppliers and contractors, and are always “shovel-ready,” to name a few—can be replicated in similar communities in the Ohio River Valley whose economies are anemic and are in need of economic development strategies that are affordable, sustainable, and effective, O’Leary explained.

Across the region, supplemental state and federal opportunities for reinvestment abound, our 2021 research found. If allocated strategically, public funds could revitalize struggling economies across the Ohio River Valley while simultaneously cleaning up the region’s once-pristine rivers, forests, and hills. As one example, a research brief published in September examined the substantial benefits of—and pending congressional proposals for—a revamped Civilian Climate Corps. A new CCC could employ thousands of out of work people, including formerly incarcerated citizens, young adults, and unemployed and underemployed workers, in carbon-farming reforestation jobs, small-scale regenerative agriculture programs, and other innovative economic development areas, the brief finds.

Injecting funding into the Appalachian Regional Commission could provide an additional economic boost to the region. A redoubled commitment to the historically under-resourced agency could result in revitalized towns with new small businesses opening in once-derelict downtowns, a stronger recovery from the ravages of the opioid crisis that has plagued the region for a decade, and more pathways to meaningful work for the generation of children now in Appalachia’s schools.

We’ve outlined how to repair the damage left behind by decades of extraction.

ORVI’s four-part “Repairing the Damage” series proposed a platform of federal recommendations on how to create jobs and restore Appalachia’s air, water, and soil by remediating the environmental burdens left behind by the oil and gas industry. Data from these reports has headlined national news and informed policymaking and policymakers from Appalachia to Washington, D.C.

In April, Senior Researcher Ted Boettner presented findings from a report on Central Appalachia’s hundreds of thousands of abandoned oil and gas wells before the House Committee on Natural Resources. Boettner explained that as many as 538,000 abandoned wells—remnants of a century of oil and gas drilling—are leaching pollution into the air and water of Ohio, West Virginia, Kentucky, and Pennsylvania. A large-scale federal program to plug them could curb harmful greenhouse gas emissions and create more than 15,000 jobs per year over 20 years.

Boettner also identified regulations to help Ohio River Valley states curb the region’s rising number of low-producing “stripper” wells. These wells are at risk of being orphaned, but because their operators aren’t required to set aside funding for well remediation upfront, the public could be on the hook for billions in clean-up costs if the companies that own them go out of business. Policymakers should pursue production fees and other policies to ensure companies, not the public, pay to retire non-producing or low-producing wells.

During a June hearing to examine the infrastructure needs of the US energy sector, Senator Joe Manchin (D-W. Va.) cited Senior Researcher Eric Dixon’s research on the disparity between federal estimations of abandoned mine land work and the true extent of mine land damage in the US. The report concludes that a robust and well-funded reclamation program with appropriate labor provisions is necessary to address the full scope of AML damage—and could create up to 344,403 total job years in addition to mitigating flood and fire risks, reducing climate-warming emissions, and restoring once-pristine forests and rivers.

The staggering decline of Appalachia’s coal-fired power plants also poses serious risks to public health and the environment in addition to economic impacts, like job loss, school closures, and the loss of essential services. These plants leave behind coal ash, one of the largest waste streams in the US. There are over 160 coal ash disposal sites in the Ohio Valley, and many of these toxic sites are located along major rivers and pose risks to public health and the environment. However, if done correctly with strong worker safety protections, cleaning up these sites can create jobs and increase the potential for redevelopment of closing coal plants. Pollution clean up is essential to ensuring these areas are places where people can safely live and work.

This year, ORVI staff held educational meetings with senators, congressional offices, state legislators, county commissions, city councilors and regional economic development groups to discuss the practical and actionable implications of our research on natural gas and alternative development. Policymakers have applauded our work on the natural gas industry and expressed enthusiasm for our models of alternative economic development. According to Greene County, Pennsylvania Commissioner Mike Belding, “the Ohio River Valley Institute’s work clearly captures the shortfalls of extractive natural gas economies, addressing the exact predicament in which my home county of Greene County, Pennsylvania finds itself.”

Our team also works closely with advocacy organizations, broader coalitions, and community working groups across the Ohio Valley region and beyond. ORVI research corroborates and uplifts frontline stories while providing tools for advocacy outreach. The friends and partners with whom we have collaborated this year include:

We’ve measurably shifted the narrative in the Ohio River Valley and greater Appalachia.

Our 2021 research has made a quantifiable splash in the region. ORVI data has reshaped media coverage of economic development in Appalachia, providing a foil to one-sided industry boosterism and stoking interest in and excitement for new economic models that invest in—rather than extract from—local communities. Here’s our 2021 impact by the numbers:

Thank you for reading and for being a pivotal part of our community. Your support makes our work possible. If you appreciate what we’ve accomplished this year, please consider a small gift to help us realize a cleaner, more sustainable Appalachia where prosperity is shared by all. Click here to donate to the Ohio River Valley Institute.